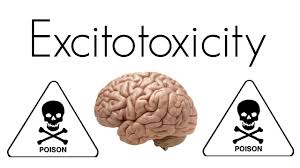 There are a number of neurodegenerative conditions that feature glutamate excitotoxicity. The emerging research has identified the glutamate excitotoxicity as a core etiology in many different degenerative conditions but also, the emerging body of literature also demonstrates the potent neuroprotective effects of certain nutritional herbs and botanicals.

These neuroprotective effects have been shown to protect against the cascade of glutamate-induced excitotoxicity and the subsequent neuronal cell death that ensues. We know that the human brain is incredibly complex.

Each neurotransmitter makes a lot of functions and they interact with each other and the neurons (brain cells) in an intricate manner that we do not fully understand. But experts are constantly learning more about the brain and they have been able to link certain neurotransmitter abnormalities to certain symptoms or illnesses.

Also, they have found ways to change the neurotransmitter function and they can see the very real effects it has on research subjects. Our brain is an efficient recycler and it is often using one neurotransmitter to create another. This function is making a lot of sense when you are talking about neurotransmitters with opposite functions, such as glutamate and GABA.

Glutamate is a kind of the cheerleader of the brain and one of its primary functions is to get other brain cells fired up. The glutamate is stimulating them so they can make important things, like learning new information or forming memories and many other things in which the glutamate is involved.

There is a growing list of neurodegenerative conditions exist which have shown to feature glutamate excitotoxicity. Some of these include:

The glutamate is the neurotransmitter which is actually one of the most abundant molecules in the brain. When the glutamate is working under normal circumstances, then it gets converted into the inhibitory neurotransmitter GABA. GAD1 (glutamate decarboxylase) is the gene/enzyme most responsible for this reaction. GAD1 is using the B – vitamin and P5P (Vitamin B6) is acting as a cofactor for this conversation.

The release of ammonia is the resultant reaction of the glutamate dehydrogenase enzyme. Ammonia is a neurotoxin so it must be converted into urea in the liver. If there are some problems with the urea cycle and the ammonia to urea conversion, then the ammonia builds up and it can lead to many serious symptoms, such as vomiting, lethargy, hyperventilation, and seizures.

This term refers to neurotoxins which also act as postsynaptic cells but they are normally found in the body. These toxins can enter the body of an organism from the environment through aerial dispersion, food intake, wounds, etc.

The most common excitotoxins include glutamate analogs that mimic the action of the glutamate at glutamate receptors, including NMDA and AMPA receptors. [6]