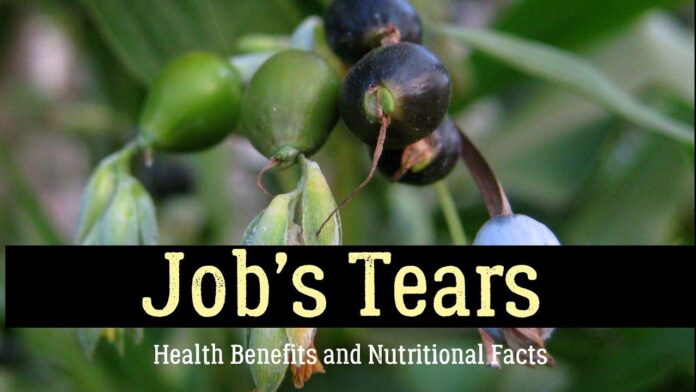 The scientific name of Job’s tears is Coix lacryma – jobi. It is native to Southeast Asia. The Job’s tears is naturalized in southern United States and the New World tropics. It is helpful for allergies. It can prevent the cancer, osteoporosis and gastrointestinal problems. The Jobs tears grows in a height of about 3 feet. It has knobbly, bamboo – like stems from the bases of which new tillers arise. The Jobs tears is a perennial tropical plant. The flowering season of Job’s tears is from July to October.

The leaves of Job’s tears have linear – oblong shape and they are 10 – 45 x 1 – 2.5 cm. in the Southern India, Job’s tears have already been grown for around 4000 years. The Jobs tears is member of the grass family and it is also well – known in Asian cultures like a food source, as well as for making jewellery. There are many different culinary uses for the Jobs tears. You can make it with brown rice porridge. You can make it as soup. You can stir Jobs tears with mushroom and broccoli.

You can make seafood paella with Jobs tears. You can make the Jobs tears as cookies. If you have never used them before, then ask your doctor if they are suitable for your health, so you will avoid any side effects. Here are some health benefits of Job’s tears:

There was one study done in 2004 in which the overweight mice were injected along with extracts of Jobs tears in a period of 4 weeks. It has been noticed that the mice fed with the extracts of Job’s tears had decreased body weights, food consumption, fat size and adipose fat tissue and cholesterol level and triglycerides compared to mice from the control group.

There are some studies in which are shown that the Job’s tears have protective benefits for the gastrointestinal system. In one study done in 2011 was shown that the Jobs tears inhibited gastric cancer cells in vitro and they were also capable for reducing the stomach ulcers in mice.

The Job’s tears extracts are utilized to deal with the endocrine disorders because this plant has the ability to reduce hormones like testosterone and progesterone. There was one study in which was shown that the painful menstrual symptoms were decreased for 90% and this is a greater result compared to control group with prescription drugs.

There was one study done in China in which were analyzed the effects of Job’s tears on cancers of the colon, breast, liver, lung and pancreas, as well as leukemia, along with promising results. In one study done in 2008 was found that the extract of Jobs tears can inhibit the fatty acid synthesis activity within the liver. This is very important because the human cancer cells consist of higher levels of fatty – acid synthase which is an element associated with the intense tumor cell growth.

One of the traditional uses of the Job’s tears is to deal with allergies. This is including topical formulations of plant extracts for the allergic skin ailments which are known as contact dermatitis. In one study done in 2003 was shown that the extracts from the Job’s tears can help to suppress the allergy symptoms in laboratory mice and increased the immune system.