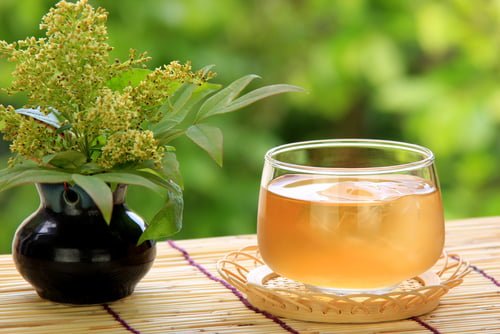 It can be consumed in both states hot and cold. The roasted barley tea is an aromatic, nutty, refreshing, and delicious drink which is slowly beginning to gain popularity. It has many health benefits which are its high concentrations of Vitamin A, Vitamin C, tryptophan, melatonin, selenium, amino acids, and various antioxidants which are making the barley tea an excellent choice for people who want to cut back on calories and boost their overall health. [1,2]

Barley tea is not gluten-free

This is a grain-based tea which means that it can be a risk for people who suffer from gluten intolerance or Celiac disease.

You should know that barley-tea is free of caffeine. In many countries, barley tea is a staple beverage, primarily in China, Japan, and Korea where it is known as maitcha, ugicha and boricha.

Also, it should be taken with some caution by people who suffer from diabetes because it can interact with some medications that are commonly prescribed to diabetics.

Barley tea has many antioxidants and all of them can help with the oxidative stress that is cause for age spots, wrinkles, and premature aging. These components can also help to improve skin elasticity and they will keep you looking younger for longer. [3]

Barley tea has high amounts of Vitamin C which can boost your immune system by promoting the production of white blood cells. This vitamin acts as an antioxidant which can counter the side effects of free radicals. [3]

It is a known fact that most teas are discouraged for pregnant women but barley tea has ample amounts of folic acid, calcium, iron, niacin, and potassium which are critical nutrients for pregnancy. Barley-tea can keep the gestational diabetes at bay, prevent certain birth defects such as neural tube defects and spina bifida and coagulate the blood to prevent excessive bleeding during delivery. [4,5] 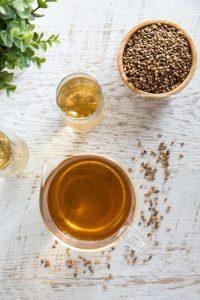 Barley tea has anti – inflammatory compounds which are great for oxidative stress, gout, arthritis, joint pain, and other inflammation issues throughout your body.

Barley tea has antioxidants which are great for inflammatory conditions of all kinds in which are included those that affect the neurodegenerative and chronic diseases. [3]

It is low in calories but it can make you feel full because it has a rich supply of nutrients, fiber, minerals, and vitamins. This will help you to avoid snacking between meals and overeating and at the same time, it will stimulate the metabolism so the passive fat burning can happen more efficiently. [6]

This tea is extremely low in sugar, despite its natural sweetens and it can help to regulate blood sugar and insulin balance in the body. You should replace sugary drinks such as soda with barley tea which is very helpful for people who suffer from diabetes or who have a notably lower occurrence of diabetes. [3]

Selenium is a mineral for which many people have rarely heard but this mineral can be critical to certain aspects of male fertility and it can protect the health of the prostate. This mineral is linked to preventing prostate cancer and barley tea has high amounts of selenium.

Barley tea has melatonin and tryptophan which are making it an excellent sleep aid. If you suffer from regularly interrupted sleep, restless night, or insomnia, then the mentioned components in barley-tea can trigger neurotransmitter release in the brain and they aid in falling into undisturbed sleep while in the morning you will feel refreshed. [3]

This tea is stimulating in nature and it can increase the blood flow because it is acting as an anticoagulant. This will reduce your chances of developing blood clots and it can prevent strokes, heart attacks, atherosclerosis, and other cardiovascular complications. [5]