Gynecomastia is a condition in which there is overdevelopment of the male breast. In response to too little testosterone (a male hormone) or too much estrogen (a female hormone), the glandular tissue of the breast swells and it forms a breast bud – enlarged breast. This condition is happening in babies, teen boys and older men. This condition can affect one or both breasts, sometimes unevenly. Older men, boys going through gynecomastia and newborns can develop this condition as a result of normal changes in their hormone levels, but also there can exists other causes. In the most this is not a serious condition but it can be tough to cope with it. Boys and men who have this condition can have pain in their breasts and in some cases they can be embarrassed. This condition may go away on its own. If it persists, then surgery or medication can help.

Men or boys who have gynecomastia can notice that their breast feels firm or rubbery. Boys can have a breast bud on one or both sides about the size of a quarter or a nickel. Breast buds are also common in adolescent boys during their puberty. They can last up to two years but also they tend to go away within the first year. Here are the signs and symptoms of gynecomastia:

You should see your doctor if you have tenderness, pain, swelling and nipple discharge in one or both breasts. 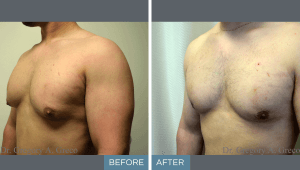