If you think that you or some person who is with you has a stroke, then you must call an ambulance. If you or the person who is with you feels that the symptoms have passed, you or he should go to your doctor. You must be checked by him or her. When the symptoms of the stroke disappear in 24 hours, then this means that you had TIA (transient ischaemic attack). But this is a reason for worry because in the near future you can have full stroke. When you are at hospital, then your doctor or specialist will give you the right treatment for your condition.

How to recognize the signs of stroke?

The most important thing for all of us is to know which are the signs and symptoms of this disease. If you have someone in your family who is having high blood pressure or diabetes or who is older person, then you must know the mentioned signs and symptoms.

Other possible symptoms of stroke: The symptoms which we have mentioned in FAST are the most common symptoms for this condition. But also there are other symptoms which can have people who have stroke such as

Mini–stroke which is known as TIA (Transient Ischaemic Attack): They have the same symptoms such as the strokes but there is a difference in them because they symptoms of TIA can last between few minutes and few hours and then they disappear completely. You might think that this is not serious condition, but you should not ignore it.  When you have TIA, then you should know that there is not enough blood supply to your brain. This means that your risk of getting stroke in the near future is increased. If you have noticed that you have TIA, then you should talk with your doctor as soon as possible. [2] 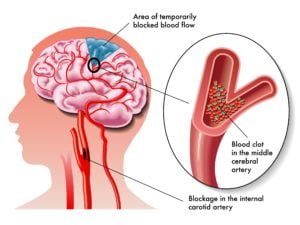 There are two types of strokes known as ischaemic stroke and haemorrhagic stroke which can be caused by different causes and they affect the brain in different ways.

This is the most common type of stroke. They happen when you have blood clots which block the oxygen and flow of blood to your brain. In the areas where your blood clots are appearing in the narrowed or blocked arteries is a process known as atherosclerosis. The most common risk factors for this kind of stroke are smoking, obesity, high blood pressure, too much alcohol consumption and high cholesterol levels in your body. [3,4]

This is not so common type of strokes. When a blood vessel which is in your skull bursts and bleeds in and around the brain, this is condition known as haemorrhagic stroke. When you have high blood pressure, then they weaken the arteries which are located in your brain which makes them to rupture and split, then you has haemorrhagic acid. Smoking, a lack of exercise, being overweight or obese, stress and drinking too much alcohol can increase the risk of this stroke. [3,5]