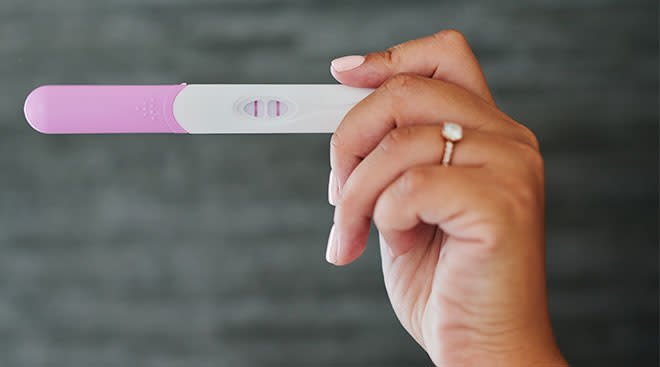 Most common early symptoms of pregnancy: 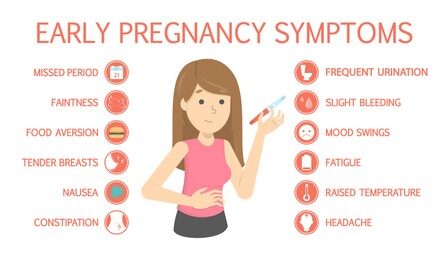 Below are given some of the most common early symptoms of pregnancy. You should remember that many of these symptoms may be caused by other things, besides being pregnant. If you notice some of the mentioned symptoms, then it is not sure that you are pregnant 100%. The only sure way to know if you are pregnant is to take a pregnancy test.

After conception, the fertilized egg is attaching itself to the wall of the uterus. This is the reason for one of the earliest signs of pregnancy – spotting, and in some cases cramping. This is also known as implantation bleeding and it happens anywhere from 6 – 12 days after the egg is fertilized. These cramps resemble those of menstruation, so some women mistake them and the bleeding for the start of their period. But, the bleeding and cramps are slight. But there is not only bleeding. Many women notice a white and milky discharge from their vagina.

This is related to the thickening of the vagina’s walls, which is starting almost immediately after conception. The increased growth of cells of the vagina is causing the discharge. This discharge can continue throughout pregnancy and it is typically harmless and does not need treatment. But, if you have noticed an itching sensation or bad smell, or a burning sensation, then you should talk with your doctor as soon as possible, so your doctor will see if you have a yeast or bacterial infection. [1]

The missed period is the most obvious early symptom of pregnancy and it is the symptom that prompts many women to take a pregnancy test. But, not all delayed or missed periods are caused by pregnancy. Also, some women can experience some bleeding during pregnancy. If you are pregnant, then you need to talk with your doctor about what you should be aware of the bleeding.

You need to know when the bleeding is normal and when it is a sign of an emergency. If you are not pregnant, the cause for missing periods can be due to you lost too much weight or you gained too much weight. Some hormonal problems, fatigue, or stress can lead to a missed periods. But, if you suspect that your missing period is a symptom of pregnancy, then you need to take a pregnancy test as soon as possible.

Every woman has heard about morning sickness as a symptom of pregnancy. But, not every woman will get morning sickness. The exact cause of morning sickness is not known. But, it has been shown that pregnancy hormones are increasing the chances of getting this symptom. Nausea during pregnancy can happen at any time of the day, but it is most commonly happening in the morning. Also, some women cannot stand or crave certain foods when they become pregnant.

This is also related to hormone changes. This effect can be so strong, so the woman’s favorite food can turn a pregnant woman’s stomach. It is possible that the food aversions, cravings, and nausea last for the entire pregnancy. But, in many cases, these symptoms can lessen for many women at about the 13th or 14th week of their pregnancy. But, in meantime, you need to be sure that you eat a healthy diet, so you and your developing baby will get all the essential nutrients. Also, you can ask your doctor for advice on your diet in this period. [2,3]

At the early start of pregnancy, it is very normal for women to feel tired. The woman can start feeling unusually fatigued as soon as one week after conceiving. This is often related to the high level of a hormone called progesterone, but other things can happen too, such as a boost in blood production, lower blood pressure, and lower levels of blood sugar. If fatigue is a symptom of your pregnancy, then you need to get a lot of rest. Also, you need to eat foods that are rich in protein and iron, because they can help offset it. [4]

This is also an early sign of pregnancy. The hormone levels of women rapidly change after conception. Because of the changes, the breasts become sore, swollen, or tingly a week or two later. Also, they breast may feel heavier or fuller or feel tender to the touch. Also, the areola (the area around the nipples) may darken. There are many other things that could lead to breast changes. But, if these changes are an early symptom of the pregnancy, then you need to remember that you need to go for several weeks to get used to the new levels of hormones. When you are used to it, the breast pain will ease up. [5]

Other early symptoms of pregnancy:

Pregnancy leads to changes in the hormonal balance and this can cause other symptoms, like:

The pregnant woman can have all of the above-mentioned symptoms, or she might have only one or two. If you have some of the mentioned symptoms and they bother you, then you need to talk with your doctor, so you can make together a plan to offset them.

Are you really pregnant?

Many of the mentioned signs and symptoms are not unique to the pregnancy. Some of them may indicate that you are getting sick or that your period is about to start. Also, many women get pregnant and do not experience some of the mentioned symptoms. But, if you miss a period and you notice some of the above signs or symptoms, then you can make a home pregnancy test or see your health care provider. If your home pregnancy test is positive, then you need to make an appointment with your health care provider. The sooner your pregnancy is confirmed, the sooner you can begin with your prenatal care.

Power Of Play: Some Special Tips For Children