Hives are also known as urticaria (this is the medical term for urticaria). This is an outbreak of swollen and pale red bumps or plaques (wheals) which appear on the skin. They appear suddenly either for unknown reasons or as a result of the body’s reaction to certain allergens. Hives usually are causing itching but also they can sting or burn. Hives can appear anywhere on the body in which is included ears, throat, tongue, lips and face. They can vary in size, which can be from a pencil to a dinner plate.

Also they can join together to form larger areas which is known as plaques. They can last for hours or they can last up to one day before they fade. Angiodema is similar condition to hives but in this condition swelling is happening beneath the skin instead of on the surface. Hives are very common condition and most often their cause is elusive. They can change size rapidly and they can move around. They disappear in one place and they can re-appear in other places, often in a matter of hours. If you have ordinary hives, then you should know that they will flare up suddenly.

These occasionally hives are produced by direct physical stimulation by environmental factors such as sunlight, cold and heat. The treatment of hives is directed at relief from the symptoms until this condition goes away on its own. The most common treatment for hives is antihistamines. Usually hives are not associated with serious complications or long – term complications. 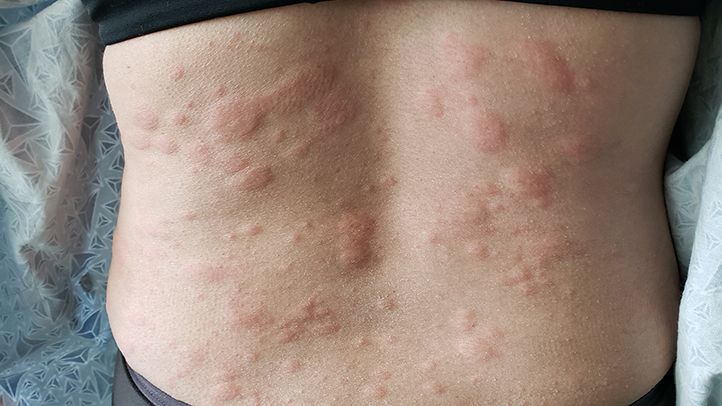 Signs and symptoms of ordinary hives

These hives flare up suddenly and usually for no specific reason. It is known that welts appear and they are often in several places. They swell; itch, flare and they go away in a matter of minutes to hours, only to appear elsewhere. This sequence may go on from days to weeks and most episodes of hives last less than 6 weeks. The cutoff point is arbitrary, then the cases of hives that last more than 6 weeks and they are often called chronic hives.

This condition is happening when the histamine and other compounds are released from the cells which are called mast cells and they are normally found on our skin. Histamine causes fluid to leak from the blood vessels which is leading to the swelling in your skin. They are very common condition and they are not considered contagious. This is annoying condition and usually resolves on their own over a period of few weeks and they are rarely medically serious. There are some hives which can be caused by allergies and insect bites or stings and chemicals but in the most cases the specific found is ever found.

There are many people who find it frustrating that they do not know the reason for their hives. There are some maneuvers like makeup, detergents, soaps and diet which are rarely helpful in preventing hives unless there is an excellent temporal relationship. The most hives are produces by immune mechanism and this is a reason why this condition is not contagious. If the infectious disease is the cause for this condition, which is possible but not likely, then the infected person can develop hives. When you have hives, then this can causes stress but the stress by itself do not cause hives.

Chronic hives can last from months to years. The evaluation of the chronic hives is difficult and allergy testing and other laboratory tests are only occasional when people have chronic hives. There are certain systemic diseases and infections which can occasionally present in the skin and could lead to hives. There are some occasional cases in which you should limit specific foods or drugs for a time to observe any affect upon your skin conditions.

Hives are very common and acute urticaria, they resolve spontaneously. There are some studies in which is shown that physicians do not generally expend much time or expense to evaluate the cause of hives of less than 8 weeks duration.