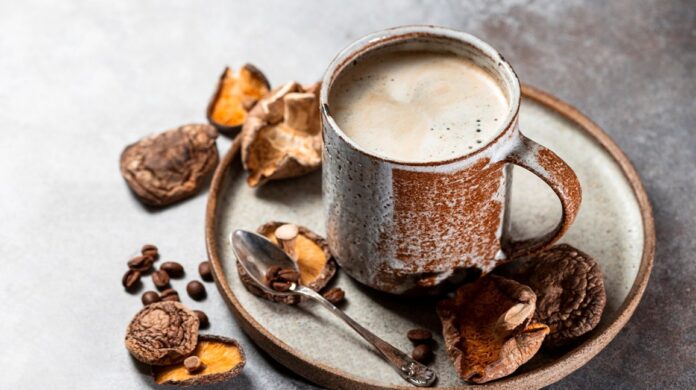 Many of us are coffee lovers, but we have not tried or even heard about mushroom coffee. It sounds like a crazy and bizarre combination. But, this is a fungus-focused coffee, which is very trendy at the moment. The mushroom coffee will give you the health benefits of the coffee along with the impressive benefits of mushrooms. Lovers of mushroom coffee say that the earthy essence of mushrooms is a complementary addition to coffee that actually makes for a smoother overall flavor.

Also, you will get even more antioxidants from mushroom coffee. This type of coffee will give you the benefits of regular coffee, but it will add more. Mushrooms which are used in mushroom coffee are nutrition-rich and they include many health properties, such as cordyceps. It has been shown that mushrooms have many health benefits, such as boosting the immune system and improve brain cells. Some of the most common medicinal mushrooms which are used in tea and mushroom coffee include reishi, Turkey tail, Lion’s mane, chaga, and cordyceps.

In most cases, it is recommended to have a max of two packets of mushroom coffee per day. Usually, mushroom coffee has less caffeine than regular coffee, but you still do not want to have a risk for caffeine overdose. For people who have autoimmune diseases, doctors say that some medicinal mushrooms can worsen the problem. So, in this case, you should not drink mushroom coffee. 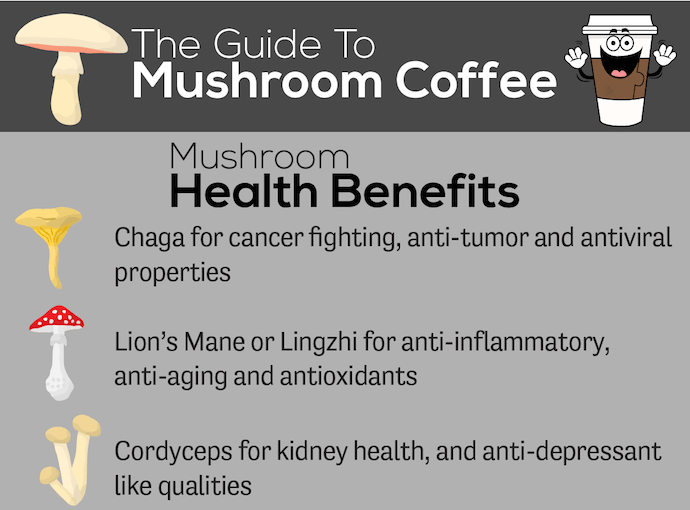 Here are some health benefits of mushroom coffee:

Nowadays, most mushroom coffee on coffee uses a mixture of half coffee and half mushroom extract. So, when you switch to mushroom coffee from regular coffee, you should end up getting roughly half of the caffeine that you normally do. You should always check the label on a product, but with the addition of mushrooms in your coffee, the amount of caffeine naturally goes down. Caffeine in moderation can improve focus yet in excess produces jitters. So, mushroom coffee can give you the same focus benefit. But, with the addition of adaptogenic or medicinal mushroom extract, your chance of nervous energy after a cup becomes less likely.

Mushrooms are rich in polysaccharides, especially in ones known as homopolysaccharides or beta-glucans. These polysaccharides are acting as prebiotics in the digestive system, which directly helps to boost digestive health in many different ways. Also, these beta-glucans have been shown in animal studies to decrease body weight, glucose levels, triglycerides, and cholesterol in diabetic mice. Also, the beta-glucans appear to have a very positive biochemical effect on insulin receptors which is equated to improved insulin sensitivity.

There are different variations of mushrooms that are included in the mushroom coffee. Reishi mushroom is one type of mushroom that is included in mushroom coffee. This mushroom is rich in adaptogens which can help to improve liver function and prevent liver disease by encouraging waste and toxins to be flushed from the body more efficiently. In one study done in 2013 was found that reishi induces hepatoprotective effects on acute liver injury because it has antioxidant properties and fights against harmful immune responses which slow down liver function.

The antioxidants found in coffee beans and mushrooms can help to defend our bodies against the free radicals we are exposed to in our daily lives. Free radicals are the reason for oxidative stress in people and this can cause cellular damage to our bodies. It is believed that oxidative stress is a big part of a lot of serious and chronic diseases, like Alzheimer’s disease, Parkinson’s disease, heart disease, diabetes, cancer, and cataracts. When you increase your antioxidant intake in your diet, then you will reduce the oxidative stress on your body and this can help you to stay away from all serious health problems. So, do not doubt to add mushroom coffee to your diet.