This type of mushroom is an unfamiliar ingredient to many people who include mushrooms in their cooking. It is an edible mushroom that is set apart from others due to its impressive nutrient profile, interesting appearance, and unique flavor. Also, enoki mushrooms have been linked to a number of different mushroom benefits and they have been well studied for their anti-cancer and immune-boosting effects.

The enoki mushroom is known for many other names, such as future mushroom, golden needle mushroom, or lily mushroom. It is a type of fungi that is common in Asian cuisine. It diverges in look from other succulent mushrooms and it is typically found in clusters with long, white stalks and small caps on the ends. This mushroom is incredibly versatile and is easy to incorporate into your cooking. It is packed with essential nutrients and delivers a punch of antioxidants, B vitamins, and fiber. The enoki mushrooms have been incorporated into many traditional forms of medicine.

Also, in history, they have been used to treat stomach problems, promote liver health, and manage blood pressure. People, who have a mushroom allergy, should avoid consuming enoki mushrooms. Also, if you experience symptoms, like itching, hives, or swelling, then stop using it and talk with your doctor. If you pick enoki mushrooms in the wild, then be sure not to confuse them with Galerina marginata, which is a type of poisonous mushroom similar in appearance, so better buy it from a trusted source. 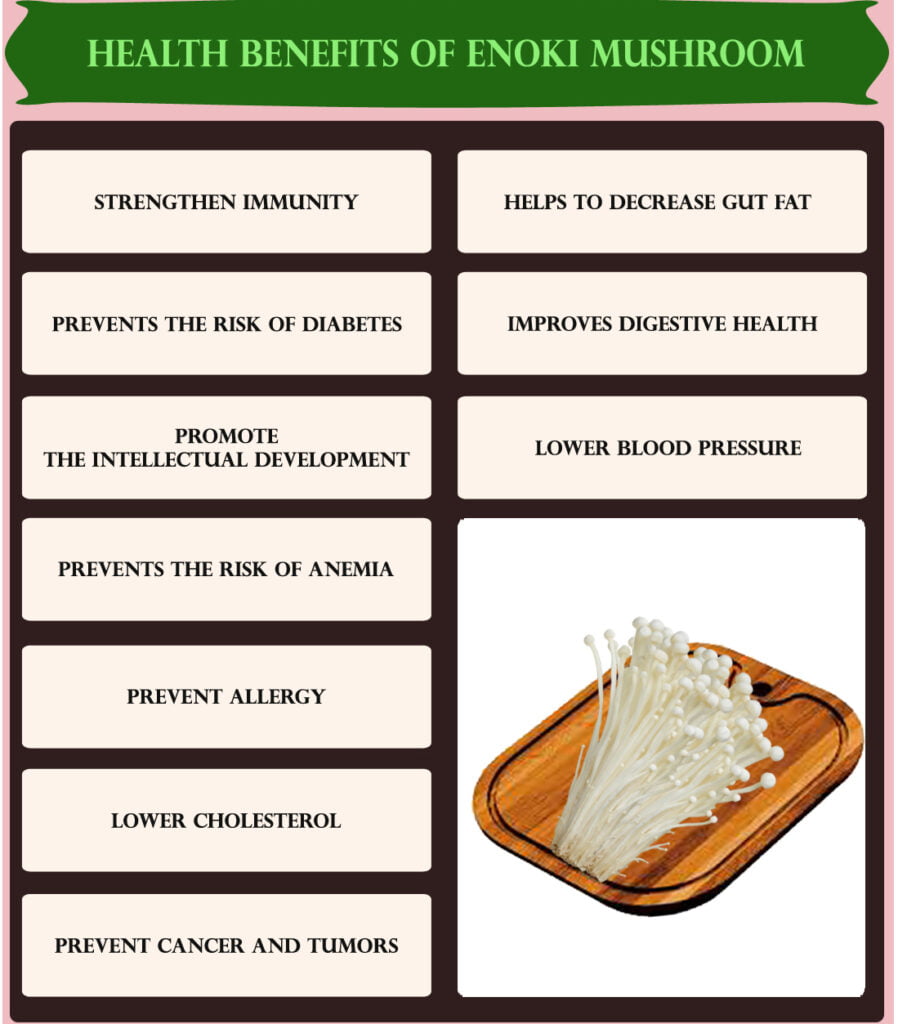 In each serving of enoki mushrooms, there are enough nutrients. These mushrooms have a lot of key vitamins and minerals. Also, enoki mushrooms are high in fiber. In a single cup of these mushrooms, there are 1.8 grams of fiber. Fiber is very important for every aspect of health, but it is very important for digestion. In studies are shown that eating more fiber can protect against issues like GERD (gastroesophageal reflux disease), diverticulitis, intestinal ulcers, hemorrhoids, and constipation.

There are some promising studies of enoki mushrooms in which are found that they have a powerful impact on heart health. In one animal study was found that hamsters who have consumed enoki mushrooms have lower levels of total cholesterol, triglycerides, and bad cholesterol. All of these factors are increasing the risk of getting heart disease.

It is known that enoki mushrooms are low in calories, but they are packed with a long list of important antioxidants, minerals, and vitamins. They are rich in B vitamins, like riboflavin, thiamine, and niacin. All of these B vitamins are essential to brain function, energy production, DNA synthesis, and more. Also, enoki mushrooms have good amounts of antioxidants. They are beneficial compounds that can help to neutralize the free radicals and also, they can help to protect against chronic disease. In one animal study was found that enoki mushrooms are good sources of antioxidants, like caffeic acid, gallic acid, catechin, and quercetin.