A migraine can cause a pulsing sensation or a throbbing pain and usually this is happening just on one side of the head. This condition is often accompanied by extreme sensitivity to light and sound, vomiting and nausea. Migraine attacks can cause a lot of pain for hours to days and this pain can be so severe that is disabling. Aura which is a warning symptom can happen before or with the headache. These can include blind spots, flashes of light or tingling in your arm or leg or on one side of the face. Medications can help to prevent some migraines and they can make migraines less painful. You need to talk with your doctor about the different treatment options if you cannot find a relief from this condition. The right medicines in a combination with lifestyle changes and self – help remedies can help. It is known fact that women are having three times more chances of getting migraines compared to men.

In the most cases, migraines begin in childhood, adolescence or early adulthood. This condition is progressing through 4 stages: prodrome, aura, headache and post – drome, but someone will not experience all stages.

There are some cases when a migraine with aura can be associated with limb weakness – hemiplegic migraine. 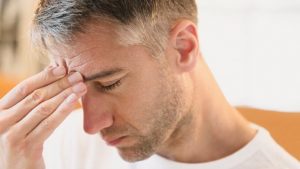 The causes for this condition are not understood, but the environmental factors and genetics can play a role in it. Also they can be caused by changes in the brainstem and its interactions with the trigeminal nerve which is a major pain pathway. Also the imbalances in brain chemicals can be involved in migraines. Here is included the serotonin which can help to regulate the pain in your nervous system. During the migraine attack serotonin levels drops. This can cause your trigeminal nerve to release substances called neuropeptides which are traveling to meninges (this is the outer covering of the brain). This is resulting in migraine pain. CGPR (calcitonin gene – related peptide) is other neurotransmitter which plays a role in the pain of migraine.

Risk factors: There are some factors that can increase your risk of getting migraines such as