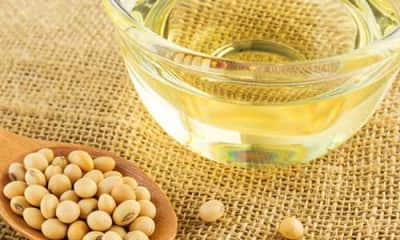 You can flip over the package of a few of your favorite foods and there is a good chance that you will spot soybean oil on the list of ingredients. It is often added to processed foods, but it is also used as cooking oil in kitchens around the globe. Between 2019 – 2020, nearly 57 million metric tons of soy oil were produced worldwide and this was up nearly 10% from 2015. But, the potential health benefits of soy oil have often called into question. Soybean oil is a type of vegetable which is derived from the seeds of a soybean plant.

It is one of the most commonly consumed cooking oils and it is often used in many salad dressings and condiments as well. The soybean oil composition is made up mostly of unsaturated fat, with 81% of its fat content coming from poly and monounsaturated fatty acids. It has about 14 grams of fat per tablespoon, many people also use soybean oil on the ketogenic diet to help ramp up their fat intake. You should keep in mind that hydrogenated soybean oil should be avoided altogether as part of a healthy diet.

These fats have trans fat, which is linked to a higher risk of chronic conditions, such as diabetes, heart disease, cancer, and more. When the soybean oil is used in moderation, then it is okay. But, you should substitute it with other healthier alternatives, such as olive oil, coconut oil, avocado oil, and grass-fed butter. Here are some health benefits of soybean oil:

One of the most popular uses of soybean oil is the promotion of hair health. It can help to retain the moisture and it can help smooth the cuticles of the hair to keep it looking shiny. Some people use soybean oil for hair to increase the effectiveness of other products, such as hair masks and treatments. You can make a DIY deep conditioner. You should try heating a few tablespoons of soybean oil and apply it to your hair. Let it soak for about 30 – 40 minutes before you wash it out and proceed with the normal hair care routine.

Has a high smoke point

Many people prefer using soybean oil for cooking because it has a high smoke point. This means that it can withstand high temperatures without breaking down and oxidizing. The soybean oil smoke point is around 450 degrees F, which is significantly higher than other oils, like flaxseed oil, canola oil, or unrefined olive oil. Its high smoke point can help to optimize the flavor foods during high–heat cooking methods, like frying, roasting, and baking, but also, this can help to protect against the formation of free radicals, which are harmful compounds that can contribute to chronic disease.

The soybean oil nutrition profile is compromised mostly of polyunsaturated fats. They are a heart-healthy type of fat that is found in a variety of foods, such as seeds, nuts, and fish. In some studies are shown that swapping out other types of fat in your diet for polyunsaturated fats could help to enhance heart health. The soybean oil has Omega – 3 fatty acids, which can help to reduce inflammation and promote heart health as well.

The soybean oil has Vitamin K, which is an important micronutrient that is involved in several aspects of health. Vitamin K is well known for its ability to maintain healthy blood clotting, which can help to stop the excess bleeding in response to injury. Also, this vitamin is involved in bone health and regulating calcium stores in the bone. One study was shown that lower intakes of Vitamin K are associated with decreased bone mineral density in women. Vitamin K can reduce your chances of bone fractures, so you can add soybean oil to your diet.