If you want to reduce your caffeine intake and you are in need of some energizing alternatives to coffee, then you should think about guayusa tea. This type of tea has some caffeine, but it is less than the brewed coffee. Also, it has some protective compounds, including some antioxidants, like theobromine, polyphenol catechins, Vitamins B, and many more. Guayusa tea is an anti-inflammatory drink. It is produced from the leaves of a holly tree. It is native to the Amazon Rainforest of Ecuador.

This drink has been used in some Amazon cultures for more than two thousand years. The guayusa tea is similar to yerba mate, but the guayusa tea is made from the leaves of a different plant. It is considered that the guayusa tree is a cousin of the yerba mate plant. When you consume too much guayusa tea, then it can lead to the same side effects as consuming too much coffee, tea, or caffeinated energy drinks.

This is due to its caffeine content plus related compounds, like theophylline and theobromine, which can be too stimulating for some people. If you find that you cannot tolerate guayusa tea well, like it gives you jitters, stomach aches or it makes your heart beat faster, then you should not drink it. 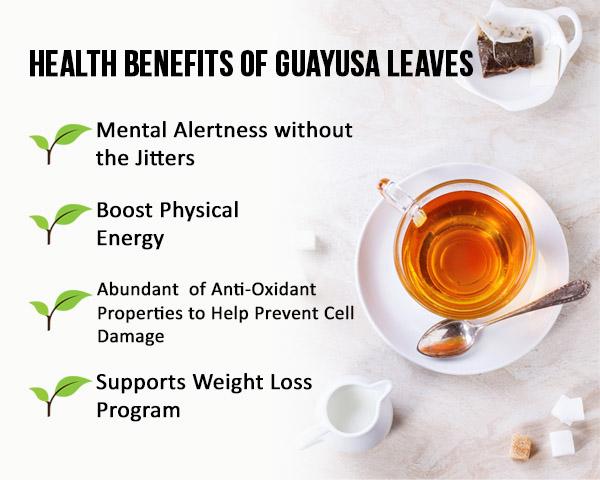 Here are some health benefits of guayusa tea:

Can help manage your appetite and mood:

It depends on the person, but caffeinated beverages can help keep hunger and cravings in check and have an uplifting, motivational effect on one’s mood. There are some studies that supplementing with guayusa tea can help to support metabolic health and aid in maintaining normal blood sugar levels. Also, caffeinated beverages can help to suppress appetite and aid in fat loss, which can be protective against obesity and related conditions, such as insulin resistance.

Can help improve concentration and focus:

The guayusa tea is the source of caffeine and other health-promoting compounds, including antioxidants. It can help to promote cognitive health and mental performance. This is a reason why you can find that guayusa tea can improve attention span, focus, and ability to learn, without leading to as much of a crash afterward compared to drinking coffee.

It has been found that guayusa leaves are rich in antioxidants, as well as anti-inflammatory compounds, which can help in the fight against free radicals and oxidative stress. Also, it is thought that it has a similar amount of antioxidants as green tea, which is considered to be one of the top longevity-promoting beverages. In some studies are shown that antioxidants in the guayusa leaves include high levels of theobromine, alkaloids, and polyphenols/catechins, and other dimethylxanthines, as well as L – theanine, ascorbic acid, isobutyric acid, guanidine, gallic acid, and some B vitamins.

It has been shown that consumption of some of these compounds is associated with increased protection against inflammation and other related conditions, such as neurological problems, diabetes, and heart disease. In one study were found 14 phenolic compounds in the guayusa leaves, including quercetin and chlorogenic acid, as well as high levels of five carotenoids were. In this study was concluded that blanched guayusa retain the concentration of phenolic compounds and some carotenoids and similar antioxidant capacity as untreated green leaves.

Can lift your energy:

The guayusa tea has caffeine, but it is packed with other nutrients which can help to mitigate caffeine side effects, but still, they help you feel uplifting. Many people describe this stimulating effect as being gentler and less jittery than other caffeine sources, such as coffee. The guayusa tea can be used to help prevent fatigue. But, it is different than a strong buzz due to its chemical composition.

The guayusa has theobromine, theophylline, and methylxanthine alkaloids and all of them can give you a natural lift in energy. It is estimated that caffeine content in guayusa tea is 66 mg per 8 – ounce serving. This will lift your mood in a natural way, but it will not overwhelm you.