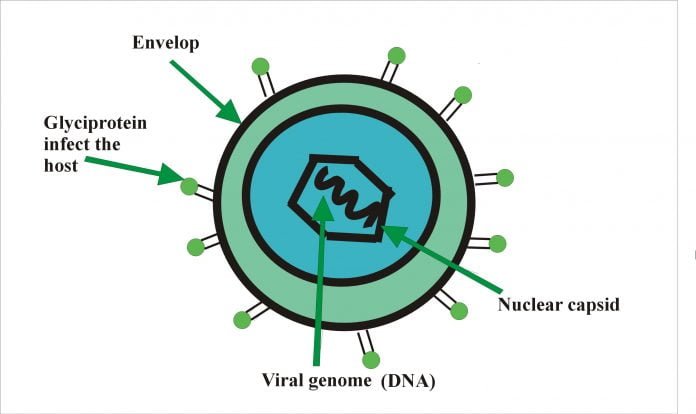 EBV is shortcut for Epstein – Barr virus. This is the virus which causes mononucleosis. This virus was first discovered in 1964 when Ms. Yvonne Barr and Sir Michael Anthony Epstein have found it in a Burkitt lymphoma cell line. This virus was linked to the disease infectious mononucleosis in the 1968. The infection which is happening with the EBV virus is common. Usually, this infection is happening in the childhood or early adulthood. This virus is causing the infectious mononucleosis (it is also known as mono) which is an illness that is associated with swollen lymph nodes in the neck, sore throat, fever and in some cases there can be enlarged spleen. This condition is also known as human herpervirus 4. It is known that people who have Epstein – Barr virus can get mononucleosis but not every single person who has this virus will get mononucleosis. The primary targets of the EBV infection are the white blood cells called B cells [1]. There are less common cases when the EBV can cause more serious disease. The symptoms which are caused by Epstein – Barr virus are usually mild and self – limited but this virus stays in the affected body for whole life. This virus can be reactivated quietly without causing symptoms and it can contaminate the saliva. Also otherwise healthy people can spread this virus to uninfected people through sharing food or kissing. This is a reason why the mononucleosis is also known as kissing disease. There are some studies in which are said that the Epstein – Barr virus is playing a role in the development of some cancers, such as nasopharyngeal cancer and lymphomas cancer [2].

When this virus is acquired, then it takes about 4 – 6 weeks for symptoms to appear. Children usually have no symptoms at all or they have nonspecific symptoms. There are rare cases when children affected with EBV can have low white blood counts, pneumonia or rashes. There are many teenagers and adults who are developing symptoms of mononucleosis. The acute mononucleosis can cause swollen lymph nodes, fatigue, fever and sore throat. The percentage of people who develop a rash due to the infection of EBV is small. The rash can happen in those people who have mononucleosis and who are taking amoxicillin or ampicillin. But this does not mean that the patient is surely allergic to penicillin or related antibiotics. The appearance of the rash is in the conjunction with the previous mentioned signs and symptoms and this can lead to misdiagnosis of EBV with other similar conditions.


You should know that the EBV is contagious and it is transmitted from person to person. It can happen all around the world. The cause for this infection in the most cases is the close person – to – person contact through bodily fluids, especially saliva. Also this virus can be spread by blood transfusions or organ transplants or it can be transmitted during sexual contact through semen. The Epstein – Barr virus has double – stranded DNA and it multiples in the white blood cells (they multiple in a certain type of lymphocyte which is called B cell) and other cells, such as those cells lining the nose, tongue and mouth. The immune system of our bodies usually is reducing this virus but it is not eliminating it. This virus will persist in a line of lymphocytes for the rest of the person’s life which is known as latent infection (this is inactive stage). There are some cases when the virus can reactivate (multiple) but it is not causing symptoms unless the immune system of the affected person is not working properly. [3]