The elderberry is one of the most commonly used medicinal plants all around the world. It was used by Native Americans for treating infections. The ancient Egyptians have used elderberry to improve their complexions and heal burns. In folk medicine across many parts of Europe, the elderberry is still used. Nowadays, elderberry is most often taken as a supplement to treat cold and flu symptoms. But, the raw berries, bark, and leaves of elderberry are known to be poisonous and cause stomach problems.

The elderberry refers to several different varieties of the Sambucus tree, which is a flowering plant belonging to the Adoxaceae family. The elderberry tree is native to Europe, though it is widely grown in many other parts of the world as well. The bark, unripe berries, and seeds have small amounts of lectins, which can cause stomach problems if they are eaten too much. 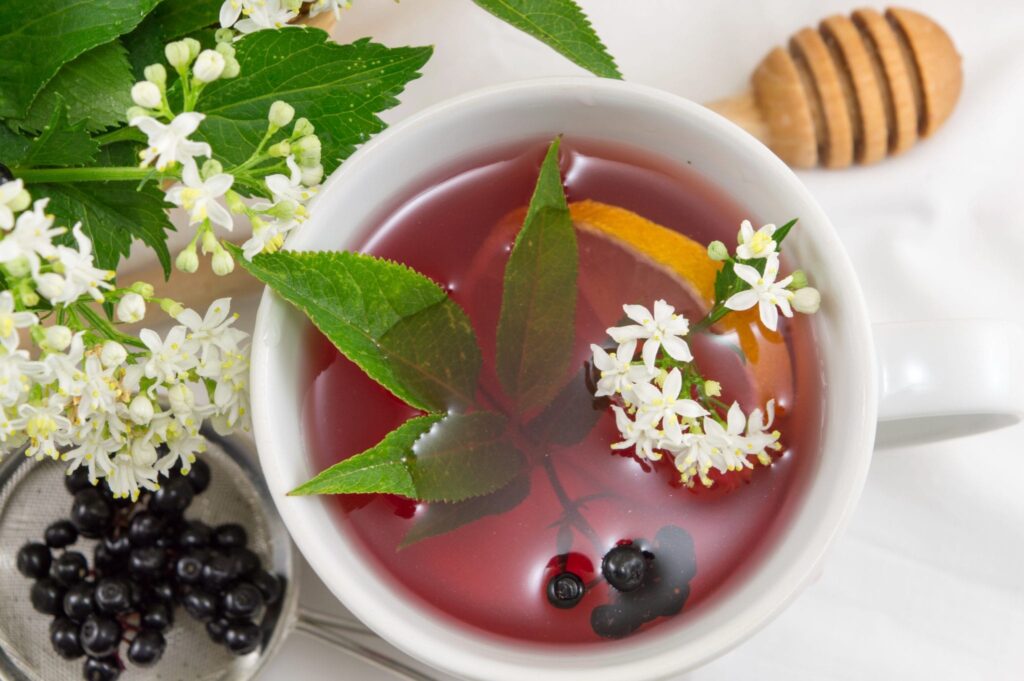 Also, the elderberry plant has substances called cyanogenic glycosides, which can release cyanide in some circumstances. You might be allergic to elderberry if you get a rash or you have trouble breathing. It is a diuretic, so be careful if you take on medicines that make you pee more. The elderberry can be a flavorful addition to your healthy diet because it is a rich source of antioxidants, fiber, and Vitamin C. Before you use elderberry in your diet, you need to consult with your doctor, so you will know that it will be suitable for you. Here are some health benefits of elderberry:

The elderberry fruit has high levels of flavonoids, which means that they have anti-inflammatory and antioxidant properties. They can help to protect healthy cells from the harmful free radicals that play a role in skin problems. The elderberry face wash can help in the fight against acne due to its antiseptic effects.

The elderberry has high amounts of Vitamin A. The elderberry can help to soothe the skin, prevent or lessen wrinkles and help to ease the appearance of age spots.

Fights against cold and flu

There are some studies in which it said that the elderberry can help in the treatment of cold and flu. In one study done in 2010 was concluded that elderberry may have antioxidant and antiviral effects, but there need to be done a lot more studies to approve the efficiency of this home remedy.

In one study, mice were fed 544 mg of elderberry extract per pound and it was noticed that it has improved the performance and mood markers.

It has been found that elderberry flowers can help to increase the frequency of urination and amount of salt excretion in rats.

In the European and American medicines was shown that the elderberry has some cancer-inhibiting properties.

There are some studies done in rats in which were shown that polyphenols can support the immune defense by increasing the number of white blood cells.

The elderberry has anthocyanins which can help to reduce inflammation. They can do it by inhibiting the production of nitric oxide by the immune cells of the body. Nitric oxide is serving as a signaling molecule that triggers inflammation in response to disease or injury. By tempering this response, swelling and pain may be relieved.

You can make tea from fried elderberry and drink it this tea as your home remedy for constipation. The elderberry has anthraquinone, which is a compound that possesses laxative properties and it can help with constipation. There are not enough studies, but it has been shown that it is safe when it used for up five days.