The Hashimoto’s thyroiditis is a condition in which the immune system is attacking the thyroid, which is a small gland at the base of your neck below your Adam’s apple. The thyroid gland is composed of the endocrine system of the body. It produces hormones that coordinate many of the body’s functions. The inflammation from Hashimoto’s thyroiditis is also known as chronic lymphocytic thyroiditis. It often leads to an underactive thyroid gland (which is also known as hypothyroidism).

If you develop some of the next signs and symptoms (constipation; pale, puffy face; dry skin; tiredness for no apparent reason), then you should visit your doctor as soon as possible. 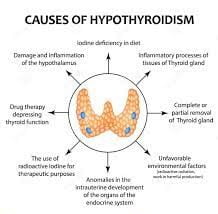 The exact cause for Hashimoto’s thyroiditis is not known. But, it is thought that many factors play a role in it. Some of them include:

If you leave Hashimoto’s thyroiditis untreated, then it can cause many health problems, such as