It is a unique tree which is evergreen tree. It is native to the rainforests of Brazil. This tree is spread to other countries, like India and Ivory Coast by Portuguese colonial settlers. Nowadays, this tree is grown in many countries around the world which have suitable climate for the growth of this tree. The cashew nut oil is dull yellowish in color. It tastes sweet and it does not have much odor.

The cold pressed virgin oil has a slightly better taste and aroma. In the South America, cashews are used to prepare sauces, curries and jams and also it is fermented into making vinegar and liquor. 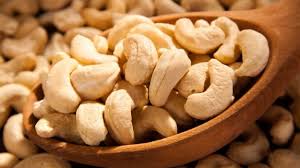 Here are some health benefits of cashew nut oil:

Good for the skin:

cashew nut oil can help to prevent the moisture from escaping the skin because of the skin barrier enhancement which is provided by the fatty acids in it and the most important of them is the oleic acid. You can use the cashew nut oil as a light skin conditioner because it can help your skin to stay smooth and it can prevent cracks which develop as a result of the dry and cold weather. The Vitamin E in it will help your skin to be nourished and it will fight against free radicals.

The cashew nut oil has very high concentration of oleic acid which gives it the property of being emollient. Also, this oil acts as a brilliant moisturizer.

The cashew nut oil has high amounts of magnesium which is very important mineral for the healthy development of muscles, tissues, bones and other organs of the body. When we add magnesium in our diet, then it means that the blood pressure in the body will be maintained.

Also, it can help t enhance the immune system, keeps bone strong and maintain nervous functions. Also, this mineral is helpful in the metabolic functions and it influences the insulin activities. It can help to control the blood sugar levels in the body.

Good for the hair:

Rich in dietary iron: It is known that the cashew nut oil is a great source of dietary iron that is very important for carrying oxygen around the body and supporting the functioning of enzymes and the immune system. The iron deficiency in the diet can lead to anemia, fatigue and bigger vulnerabilities to infections.

When you use the cashew nut oil on regular basis, then it can lower the risk of formation of gallstones. Cashews are very important during the pregnancy period for the growth of the baby and the developmental years of childhood to sustain a steady state of the body. You can add the cashew nut oil in your cooking but if you have never consumed it before, then talk with your doctor about the recommended dosage.

ABOUT US
We provide health care consulting services and natural remedies for people of USA. Our goal is to collaborate with readers to help them resolve their health problems and achieve their goals efficiently, effectively, and professionally. Also we are offering blogs related to healthcare from which people can get solutions for their queries. Our experts will help you to solve any of your issues regarding your health.
Contact us: [email protected]cures.om
FOLLOW US
© Home remedies and Natural treatments in USA
Posting....