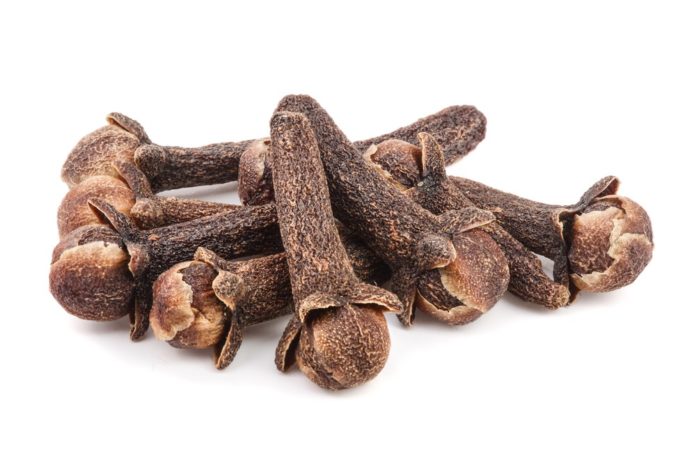 We know that cloves are the flower buds of the clove tree which is an evergreen tree. The scientific name of this evergreen tree is Syzygium aromaticum. It is found in both whole and ground forms. This versatile spice can be used to season pot roasts, bring spicy warmth to cookies and cakes and add hot flavor to hot beverages. You may know clove as one of the main ingredients in the gingerbread baked goods or as a staple spice in the Indian cuisine.

Cloves have sweet, aromatic taste and they are also known for their potent medicinal properties. Cloves are native to Asian countries, like Pakistan, India and Indonesia and even areas of East Africa. It is known that in Indonesia, cloves are consumed on a large scale in the form of cigarettes which are also known as kreteks. These clove cigarettes have emerged as an alternative to tobacco cigarettes, but studies have shown that kreteks are worse than conventional cigarettes. You should avoid these cigarettes if you want to improve your health.

Headache treatment: You can use cloves as your home remedy for headaches. You should make a paste of few spice buds and mix them with a dash of rock salt. You should add this to a glass of milk. This mixture can help to reduce the headache quickly and effectively.

Oral health: You can take cloves orally for reduction of gum disease, such as periodonitis and gingivitis. The clove bud extracts can significantly control the growth of oral pathogens, which are responsible for many different oral diseases. Also, you can use cloves for toothaches due to their pain – killing properties.

Anti – inflammatory properties: Cloves have anti – inflammatory and pain – killing properties. There are some studies done to lab rats in which are said that the eugenol present in cloves can reduce the inflammation caused by edema. There are some studies in which are confirmed that the eugenol has the ability to reduce the pain by stimulating the pain receptors.

Immunity booster: Clove is used as a home remedy for developing and protecting the immune system. This is said in the Ayurvedic medicine. It is known that the dried flower bud of clove has compounds which can help to improve the immune system by increasing the white blood cell count and this can improve the delayed – type hypersensitivity.

Bone preservation: It is noticed that the hydro – alcoholic extracts of cloves include phenolic compounds, such as eugenol and its derivatives, such as flavonoids, isoflavones and flavones. There are some studies in which are shown that the extracts can be helpful in preserving bone density and mineral content of bone, as well as increasing tensile strength of bones in case of osteoporosis. There should be done a lot more studies in future to approve or disapprove this claim about cloves.

Diabetes management: Cloves have been used in the ancient medicine for the treatment of many diseases, such as diabetes. In people who suffer from diabetes, the amount of insulin produced by the body is either insufficient or it is not produced at all. Extracts from clove can initiate insulin in certain ways and they can help in controlling blood sugar levels. There was one study in which is shown that cloves can have a beneficial effect on diabetes as part of plant – based diet.

Liver protection: Cloves are rich in antioxidants which are ideal for protecting the organs either from the effects of free radicals, especially in the liver.