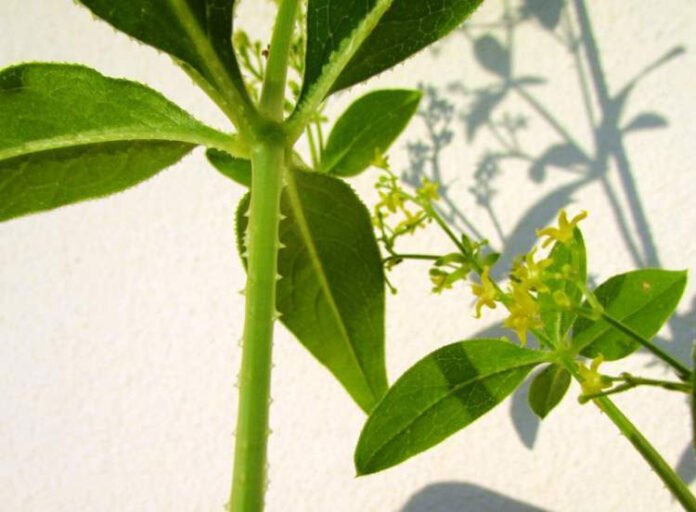 Nowadays, it became a part of Central and Northwestern Europe, where it became naturalized. The name “Rubia” comes from the Latin word “ruber” which means red and it refers to the red dye from the plant’s roots. This mader grows up to 1.5 tall. It is found that this mader grows in neglected ground, hedgerows and among rubble. This mader thrives in well – drained loamy soil in full sun or semi – shade. The root of this mader is quite elongated and it can measure up more than a meter in length and it is about 12 mm thick.

The common mader has small berries which are about 4 – 6 mm in diameter. The fruit color varies between red and black. The taste of fruit is bitter. There are some studies in which are said that the common mader can lead to cancers, like kidney and liver cancers, so you should consult with your doctor before you start using it so you will be sure. It is recommended for young children, breastfeeding mothers and pregnant women to avoid the usage of common made. The root of this mader is likely to be unsafe when it is consumed by mouth, because the chemicals in it can lead to cancer. You should use the common mader under a supervision of a medical practitioner.

Health benefits of the common mader

There are some studies done on animals in which are noticed that animals get healed faster from the diarrhea with the usage of common mader. We know that the diarrhea is a frequent need to empty the bowels, and the stool is typically loose and watery. The diarrhea can automatically heal after some days, but it can be uncomfortable for some sufferers. There are some studies in which are noticed that the common mader can effectively heal diarrhea.

Good for the skin

The common mader root is considered as an effective home remedy for skin irritations, boils, skin rashes and acne. You can apply it topically to the affected area, but previously you need to make it into a paste. You should mix about 100 grams of common mader root powder with around 50 grams of the next ingredients: orange peel, turmeric and sandalwood. You should apply this paste on the skin and let it to dry before you wash it off.

The common mader root can help to stop the cough due to its natural expectorant properties. It reacts very fast. The expectorant is an agent which can help to encourage the release of sputum by the air passages. The sputum is a mixture of saliva and mucus which is formed in the respiratory tract, such as phlegm. This is a reason why the common mader root can be used in the treatment of coughs.

The common mader root has the ability to treat jaundice. The jaundice is a term which is used to describe a condition in which there is excess bilirubin in the blood and this is resulting in a discoloration of mucous membranes, the skin, as well as the white parts of eyeballs into yellow. The dark urine, light – colored stools, yellow discoloration of the part of eyeballs, skin and mucous membranes are the most common symptoms of jaundice. You should talk with your doctor about the best way of using the common mader root as your home remedy for jaundice.