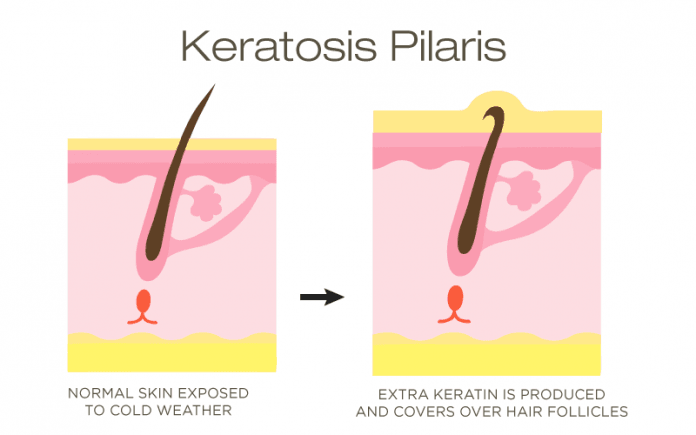 This is a very common but harmless skin condition which is causing dry and rough patches and tiny bumps which usually appear on the buttocks, cheeks, thighs and upper arms and in some cases they can appear with swelling or redness. They can also show up on the face but this is a less common case of keratosis pilaris. These bumps in most cases do not itch or hurt. Keratosis pilaris do not go worse. There are many children and teens who get keratosis pilaris and this condition usually disappear when they are getting older. These bumps are often light – colored. In many cases keratosis pilaris is considered as a variant of normal skin. This condition cannot be prevented or cured. You can treat the keratosis pilaris with moisturizers and prescription creams to help to improve the appearance of your skin. In the most cases, keratosis pilaris disappears by age thirty. There are some people who are saying that these bumps are looking like goosebumps or their skin looks like a skin of a plucked chicken. Also there are other people who mistake keratosis pilaris with small pimples. If the appearance, dryness or itch of these bumps bothers you, then you should consult your doctor and use some treatment because it can help you.

Treatment can ease the symptoms of keratosis pilaris and it can help you to see clearer skin. In many cases the treatment of dry skin can help. When someone has dry skin, then it can make these bumps more noticeable. Also there are many people who have said that these bumps clear during the summer and they are only returning in the winter. If you have decided not to treat the bumps of keratosis pilaris and if you live in a dry climate or if you frequently swim in pool, then you can see the bumps year round. These bumps, as we have mentioned can appear anywhere on the skin, except the soles and palms. Bumps on your arms are most common. Children usually have bumps on their cheeks, thighs (front) and upper arms. Teens and adults usually have bumps on their buttocks, thighs (front) and upper arms. Also there are some people who develop so many bumps on their skin so these bumps extend to their forearms and lower legs.

This condition can happen at any age but it is more common in young children. Here are signs and symptoms of keratosis pilaris:

Also there are some people who have noticeable bumps which look like pimples or a rash. In the most cases, treatment for keratosis pilaris is not needed. If you are concerned about the appearance of your child’s skin, then you should talk with a doctor or dermatologist (this is a specialist in skin diseases). Your doctor can make a diagnosis by examining your skin and the characteristic scaly bumps. 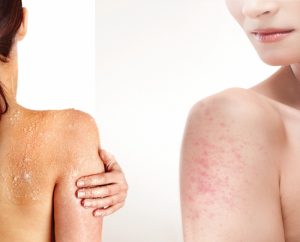 This condition results from the buildup of keratin. This is a hard protect which protect our skin from infections and harmful substances. The keratin forms a scaly plug which blocks the opening of your hair follicle. People who have dry skin are having increased chances of developing keratosis pilaris. This condition is usually worse during the winter months when there is less moisture in the air and it can clear up in the summer. Keratosis pilaris is often associated with some skin conditions in which are included eczema (that is also called atopic dermatitis). In the most cases many plugs form which are causing patches of rough and bumpy skin. There is not someone who surely knows why keratin builds up. Keratosis pilaris can happen in association with genetic diseases or with other skin conditions such as atopic dermatitis. Also the dry skin can worsen this condition.

When you have a clouding of the normally clear lens of your eyes, then you have this condition which is known as cataracts. People...
Read more

If you have simple earache, then there are many earaches home remedy which you can use to treat this condition. In the most cases...
Read more

Mono, or infectious mononucleosis, refers to groups of symptoms which are usually caused by the EBV (Epstein – Barr virus). It typically happens in...
Read more

Learning disabilities are increasing in children. If you are concerned that your child has learning disability, you should not be disappointed. There are many...
Read more

Corneal ulcer is epithelial defect with underlying inflammation on the cornea or open sore. The cornea is the clear structure in the front of...
Read more