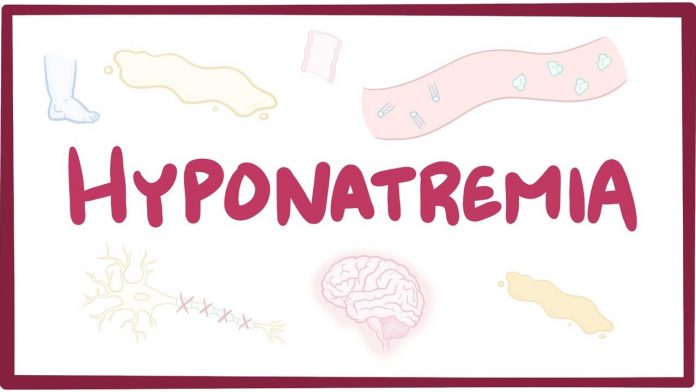 This is a condition which is happening when the level of sodium in the blood is abnormally low. We know that the sodium is electrolyte which can help to regulate the amount of water which is in and around the cells. When someone suffer from this condition, then one or more factors (which can range from underlying medical condition to drinking too much water during endurance sports) are causing the sodium in the body to become diluted. When this is happening, then the water levels of our bodies rise and our cells begin to swell. This swelling can cause many health problems which can range from mild to life – threatening. In general, the treatment of hyponatremia is aimed at resolving the underlying condition. It depends on the cause of hyponatremia, you may simply need to cut back on how much you drink. When there are other cases of hyponatremia, then the affected person may need medications and intravenous fluids. [1]

Signs and symptoms of hyponatremia

Here are the most common signs and symptoms of hyponatremia:


We know that the sodium is playing an important role in the body. Sodium can help to maintain the normal blood pressure, regulates your body’s fluid balance and supports the work of your nerves and muscles. It is known that the normal sodium level is between 135 and 145 mEq/L (miliequivalents per liter) of sodium [2]. When the sodium in our blood fall below 135 mEq/L then the hyponatremia is happening. There are many possible conditions and lifestyle factors which could lead to hyponatremia such as

Risk factors: There are some factors which can increase your risk of hyponatremia such as

[8] Ruzicka M, McCormick B, Magner P, et al. Thiazide diuretic-caused hyponatremia in the elderly hypertensive: will a bottle of Nepro a day keep hyponatremia and the doctor away? Study protocol for a proof-of-concept feasibility trial. Pilot and Feasibility Studies. 2018;4.