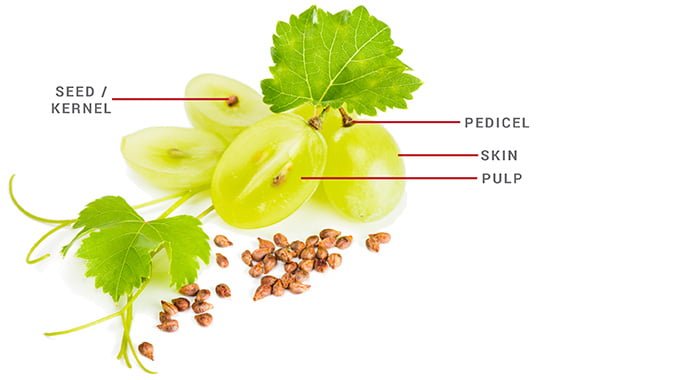 This type of oil is pressed from the seeds of grapes. This oil is a by – product of the winemaking. The grapeseed oil exists more than 6,000 years. There are many studies in which are said that the Europeans have used this oil for the treatment of eye and skin disorders. Since the 20th century this oil has gained its popularity. Grapeseed oil has both Omega – 3 fatty acids and Omega – 6 fatty acids. The grapeseed oil usually is used in two ways – culinary or cosmetic usage. Here are some health benefits of grapeseed oil:

We know that the treatment of acne can be very difficult for many people. Many people treat them but the scarring which is left behind them is making them to feel embarrassed. You can use the grapeseed oil as your natural treatment for acne because it has astringent properties which can reduce the pimples and inflamed areas of the skin, reduce the appearance of scars and it can help to close the pores. There are many cosmetic products which are using grapeseed oil as their component.

This oil can help to reduce the scarring. It is rich in Vitamin E but also it has Vitamin D and Vitamin C and all of them work together to reduce the visible skin damage. It is known that the Vitamin C can stimulate the collagen production which is the integral protein to help the skin to retain the youthful vigor and appearance.

This oil is rich in polyunsaturated fatty acids which can help to reduce the high cholesterol levels but also this is possible due the presence of proanthocyanins. The polyunsaturated fatty acids can reduce the cholesterol levels, especially LDL and triglycerides. The proanthocyanins in it can help to reduce the oxidation of LDL and this can promote the accumulation of atherosclerosis plaques on the blood vessel walls.

The poor lifestyle choices can increase the risk for cancer. This can include eating highly processed foods diet which is promoting inflammation and free radical damage which is causing the cellular mutation to be with increased frequency. Grapeseed oil has high levels of anti – inflammatory compounds, such as linoleic acid and Vitamin E which can reduce the damaging processes which are promoting cancer and they can help to eliminate the early state cellular mutations which are reason for cancerous changes.

There are many different hair moisturizers but the grapeseed oil is one of the best because it is lighter which means that your head will not feel greasy. Also it has generous amounts of linoleic acid and Vitamin E which can nourish the hair and it will protect it from the excessive UV damage.

This is one of the most important sex hormones, which is especially important in men. Also it is present in women and it is playing an important role in the regulation of estrogen synthesis and sexual health. The grapeseed oil has anti – aromatase action which is reason why it is most appreciated in men. The aromatase is enzyme which is converting the testosterone into estrogen in men and this is normal but in many cases it is undesirable process. This is true especially in obese men who have lower than normal testosterone values and higher conversions. The regular consumption of the grapeseed oil can prevent a lot of this hormonal conversion which is allowing more testosterone to fulfill its psychological functions which can trickle down into many beneficial aspects of the men’s health.

Grapeseed oil reduces swelling from a variety of causes

The result of inflammatory process is swelling but also there are some cases when it can happen due to the abnormal fluid retention. The grapeseed oil can mitigate swelling of both origins. This oil can reduce the edema of the legs which will improve the venous return. Also this oil is working as an excellent home remedy to alleviate the swelling which has an immune component, such as pro – inflammatory skin disorders or arthritis conditions.