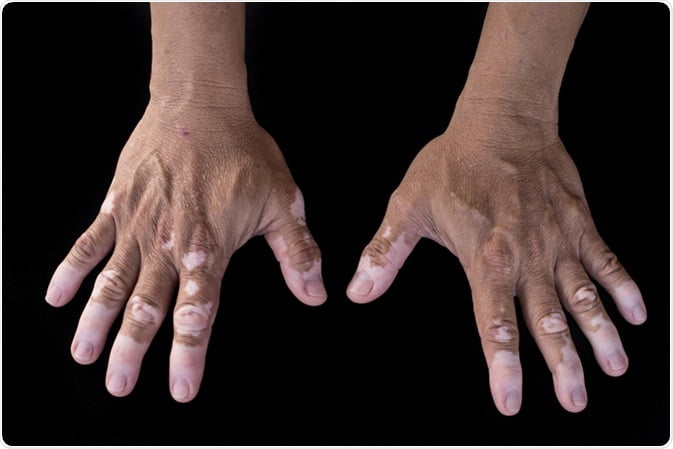 The idiopathic guttate hypomelanosis is a term that is used to describe 2 – 5 mm flat white spots that are found on the shins and forearms. Idiopathic means that the cause is not known. Guttate means resembling teardrops. Hypomelanosis refers to the lighter color of the affected areas. 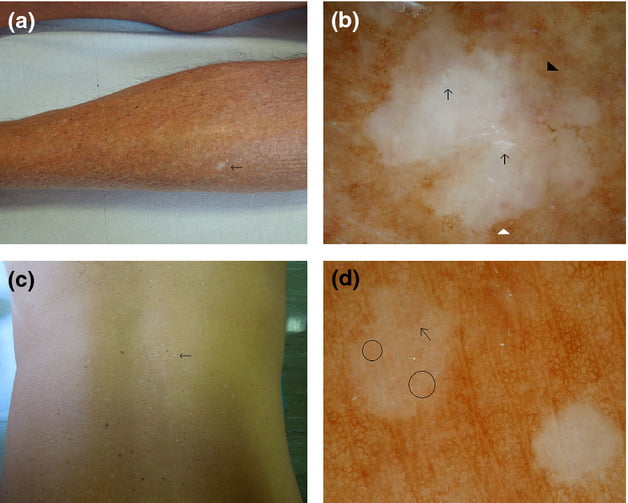 Usually, the white marks are smooth and they have a reduction in the normal skin markings, but they may be slightly scaly. It has been noticed that idiopathic guttate hypomelanosis appears as a part of the aging process and it becomes more common in people who are over 40 years of age [1].

Also, it is noticed that it is more common in women than in men [2]. Also, inherited factors may be relevant as the lesions appear to be more common in the family members. In most cases, idiopathic guttate hypomelanosis is diagnosed by visual examination and biopsies are normally unnecessary. You should know that the dermoscopic examination of the lesions is showing the hypopigmented macules with normally pigmented flecks dispersed within them, as well as extending outwards from their perimeter.

Also, the macules can be in different shapes, which depend upon the duration of the lesion. The idiopathic guttate hypomelanosis needs to be differentiated from other hypopigmented conditions, such as pityriasis alba, pityriasis Versicolor and lichen sclerosis.

There are many different modalities of treatment that have been used for this condition, such as laser resurfacing of the skin, dermabrasion, chemical peels or cryotherapy, topical calcineurin inhibitors or retinoids, and corticosteroid injections into the lesion. It seems that the non – ablative fractionated carbon dioxide laser is having the most promising abilities to induce the healing of the lesions with the normal pigmentation post-treatment.

When the skin biopsy is made, then it is shown that there is no melanin pigment in the keratinocytes of guttate hypomelanosis lesions. Also, there is a reduction in the number of melanocytes (these are pigment-producing cells). The skin is slightly thinner than normal and it is flattened out. The cause for the idiopathic guttate hypomelanosis is speculative. In some studies is said that it is an inevitable part of the aging process, with a gradual reduction in the melanocytes, which is a similar process to graying of hair. Also, there are other theories for the cause of idiopathic guttate hypomelanosis and they include:

It does not appear that idiopathic guttate hypomelanosis is caused by trauma or viral infection. The white areas on the skin do not predispose to skin cancer.

There are some factors that can increase the risk of idiopathic guttate hypomelanosis, such as

There are some studies in which it is thought that the basic pathophysiology is due to the inability of the keratinocytes to perform their normal phagocytosis processes and insert melanosomes into the cytoplasm, despite the presence of a normal number of melanocytes. Also, it has been shown that local factors are a potent influence in the developmental process.

This may be happening due to the diagnosis which is more frequently made in young women due to the high level of consciousness about the cosmetic disfigurement caused by the lesions. But, also there is the belief that this is happening because lower extremities are more likely to be sun-exposed. The patches are more prominently seen in dark-skinned people.

[1] Nair P, Sreenivas B. A clinical study of idiopathic guttate hypomelanosis and its association with diabetes mellitus. Journal of Skin and Sexually Transmitted Diseases. 2020.