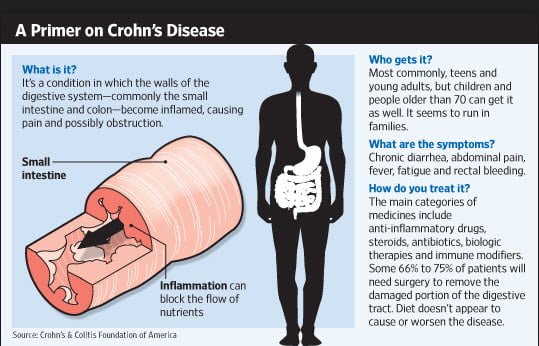 This disease is IBD (an inflammatory bowel disease). It can cause inflammation of the digestive tract which can lead to malnutrition, weight loss, fatigue, severe diarrhea and abdominal pain. The inflammation which is caused by this type of disease can involve different areas of your digestive tract in different people. The inflammation which is caused by Crohn’s disease often can spread deep into the layers of your affected bowel tissue. This disease can be debilitating and painful and in some cases it can lead to life – threatening complications. There is no cure for Crohn’s disease. There are some therapies which can reduce the signs and symptoms and also they can bring about long – term remission. There are many people who use treatment and they can function well with it.

Other signs and symptoms: People who have severe Crohn’s disease can experience: 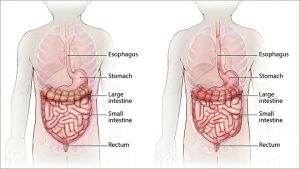 The exact cause for Crohn’s disease is not known. In the past studies doctors were suspecting that stress and diet are causes for Crohn’s disease, but nowadays they know that they can aggravate it but not cause it. There are many factors which can play a role in its development such as

Risk factors: Here are some factors which are increasing your risk of getting Crohn’s disease:

[6] Parkes GC, Whelan K, Lindsay JO. Smoking in inflammatory bowel disease: Impact on disease course and insights into the aetiology of its effect. Journal of Crohn’s and Colitis. 2014;8(8):717-25.