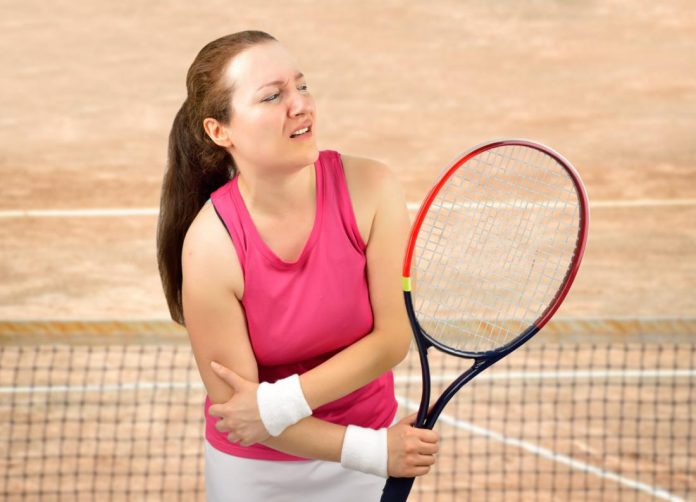 Tennis elbow is also known as lateral epicondylitis. This is a painful condition which happens when tendons in the elbow are overloaded, usually is happening by repetitive motions of the wrist and arm. When you hear this name “tennis elbow” you must thought that just athletes develop it but they are not the only people who can develop it. Also there are jobs which feature the types of motion which can lead to tennis elbow such as butchers, carpenters, painters and plumbers [1]. The pain of the tennis elbow primarily is happening where the tendons of the forearm muscles attach to a bony bump on the outside of the elbow. This pain can also spread to wrist and forearm. Over – the – counter pain relievers and rest can help to get a relief from tennis elbow. If the conservative treatments do not help or if the symptoms are disabling, then your doctor can suggest making surgery. You can notice pain on the outside of the upper forearm just below the bend of the elbow. Also you can notice pain when you are lifting or bending your arm. You can notice pain when you are gripping small objects such as a pen. Also you can feel pain when you are twisting the forearm such as opening a jar or turning a door handle. Also you can find difficult to fully extend your arm.

The pain which is associated with this condition can radiate from the outside of the elbow into the forearm and wrist. Weakness and pain may make it difficult to:

The pain of this condition is often worse when you are using your arm, particularly for twisting movements [2]. Also the repetitive wrist movements such as gripping and extending your wrist also can increase your pain. If you have tennis elbow, then you will experience:

An episode of tennis elbow will usually last between 6 months and 2 years. But the majority of people, 90% of people diagnosed with tennis elbow, will make a full recovery within a year. You should see your doctor if the self – care steps such as ice, rest and the use of over – the – counter relievers do not ease your elbow pain and tenderness.

The elbow joint is surrounded by muscles which move your elbow, wrist and fingers. This condition is muscle strain injury and overuse. The cause for this condition is the repeated contraction of the forearm muscles which you use to straighten and raise your wrist and hand. The repeated motions and stress to the tissue can result in series of tiny tears in the tendons which attach your forearm muscles to the bony prominence at the outside of the elbow. One of the possible causes for tennis elbow is playing tennis. In tennis there is repeated use of backhand stroke with poor technique [3]. But also there are other common arm motions which can cause tennis elbow such as:

The type of pain which is usually happening on the inner side of the elbow is often known as golfer’s elbow.

Risk factors: There are some factors which can increase your risk of tennis elbow such as

Certain sports: When people are taking parts of some racket sports, then it is increasing their risk of tennis elbow, especially if they employ poor stroke technique. [4]

Occupation: It is known fact that people who have joints that involve repetitive motions of their arm and wrist are having increased chances of developing tennis elbow. Examples of these occupations are: cools, butchers, carpenters, painters and plumbers. [1]

Age: This condition can affect people from all ages but it is most common in adults which are between the ages of 30 and 50. [5]