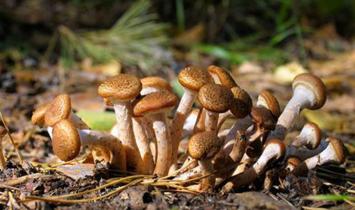 The honey mushroom is found growing in temperate regions around the globe, including areas like North America, Europe, and Asia. It is a genus composed of several types of parasitic fungi that grow on wood. The honey mushroom feeds on dead plant material and it can cause root rot in trees, which spread through root-like structures, known as rhizomorphs. Usually, these species have long life spans. They form some of the largest living organisms in the world.

Also, it is not recommended to consume alcohol with honey mushrooms and some species should not be eaten within 12 – 24 hours of drinking alcohol to prevent negative symptoms. When you are looking for honey mushroom, then be careful of honey mushroom, because it looks like a deadly galerina, which is a type of mushroom that is similar in appearance and it can be toxic. If you are not sure that you have honey mushrooms, then talk with an expert, so you will not risk your health. There are plenty of recipes which you can make with honey mushrooms, so enjoy them.

Here are some health benefits of honey mushrooms:

High blood pressure can lead to many serious health problems, such as vision problems, impaired wound healing, increased thirst, and impaired headaches. One in vitro study done in 2015 was shown that the extract of this mushroom exhibited powerful antioxidant and blood sugar–lowering properties. This is implying that this type of mushroom could be used to establish dietary supplements and pharmaceutical products aimed at treating diabetes.

The potential to enhance brain function and protect against neurodegenerative disorders is one of the most promising uses for the honey mushroom medicinal properties. In one animal study was found that the extract from honey mushroom was effective at improving neuron function, decreasing the buildup of proteins in the brain that have been linked to Alzheimer’s disease, as well as preventing cell damage.

There needs to be done a lot more studies in the future to determine how honey mushrooms can affect cancer in people, but some studies are shown that it could help to block the growth and spread of cancer cells in vitro. In one in vitro study was found that armillarikin, which is a compound found in the Armillaria mellea, was able to kill off liver cancer cells. In other studies are saying that it could even be therapeutic against leukemia and esophageal cancer cells as well.