The turmeric essential oil is derived from turmeric. It is well–known for its anti-aging, anti-inflammatory, antiprotozoal, anti-proliferative, anti-tumor, anti-malarial, anti-microbial, and antioxidant properties. This home remedy has a long history as a coloring agent, spice, and medicine. The turmeric essential oil is an extremely impressive health benefit agent and it has promising anti-cancer properties. This home remedy has benefits due to its phenols, vitamins, and other alkaloids.

This home remedy is considered to be a strong relaxant and balancer to the body. In Ayurvedic medicine, this home remedy was used to support the imbalance of Kapha body type. Turmeric is a perennial herbaceous plant that belongs to the ginger family. It grows to a height of about 3 feet and it has yellow flowers. The root of this home remedy is bright orange with thin brownish skin. It is native to southern India and Indonesia.

Here are some health benefits of turmeric essential oil: 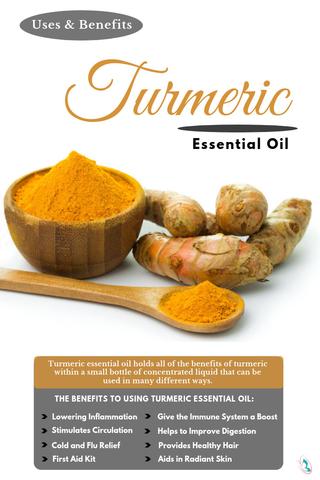 It has been shown that turmeric essential oil has anti-microbial and anti-inflammatory properties which can help with the nasal congestion that typically accompanies the common cold. You should add a few drops of turmeric oil to a diffuser or bowl of hot water and inhale the vapors to quickly alleviate the stuffy nose. Also, when you inhale the turmeric essential oil can help you to fight against germs that caused your cold in the first place.

There was one study done in 2013 in which was shown that the aromatic turmerone (this is a component in the turmeric essential oil) as well as curcumin, can help in the fight against colon cancer in the animal models, which is promising for people who struggle with this disease. It has been noticed that the combination of curcumin and turmerone, which were given by mouth, at both low and high doses, has the ability to abolish tumor formation.

The turmeric essential oil has anticonvulsant properties which in a combination with the sesquiterpenoids have previously shown positive results in both zebrafish and mouse models of chemically–induced seizures. One study done in 2013 was shown that the aromatic turmerone has anticonvulsant properties in acute seizure models in mice. It has been shown that turmerone has the ability to modulate the expression patterns of two seizure-related genes in zebrafish.

Has the ability to help in the prevention of neurological diseases:

In some studies are shown that turmerone, which is a major bioactive compound of turmeric oil inhibits microglia activation. Microglia are types of cells that are located throughout the spinal cord and brain. The activation of microglia is a tell–tale sign of brain disease. The fact that turmeric essential oil has a compound that stops this harmful activation is highly helpful for the prevention and treatment of brain disease.

One study (in this study were used animal subjects) was shown both in vitro and in vivo aromatic turmerone that causes neural stem cells to rapidly increase in number. It is believed that the aromatic turmerone found in turmeric essential oil is a promising natural way to support regeneration and to improve neurologic diseases like stroke, spinal cord injury, Alzheimer’s disease, and Parkinson’s disease.