The honeysuckle is an orange colored scented flower. It has pewee deep – bluish berries which grow along with the flowers and they can be poisonous at times. The bell shaped shrub is a part of the Lonicera family. It is usually found in Northern Canada, far Northern Europe, Far East, Russia and North Asia. The honeysuckle family has more or less 200 species and 3 of them are known for their health benefits which are used for medicinal purposes. These species are Japanese Honeysuckle, European Honeysuckle and Blue Honeysuckle. It has many nutritious values which is a reason why it is often combined with other herbs to create amazing health – boosting drinks. Echinacea, milk thistle, cowslip, ginger root and mulberry are herbs which are a great combination with honeysuckle. Raw honeysuckle has many health benefits. Honeysuckle can be find in two other forms – tea and oil and both of them are having many health benefits. They have been used in the traditional Chinese medicine for time immemorial. Doctors are recommending expecting mothers not to use honeysuckle because it can cause bleeding which is extremely harmful for them and their babies. Here are some health benefits of honeysuckle:

Honeysuckle ability to give you a relief from nausea

The honeysuckle tea is very effective for people who suffer from hepatitis C because it can help to curb down the pesky nausea and vomiting sensation. 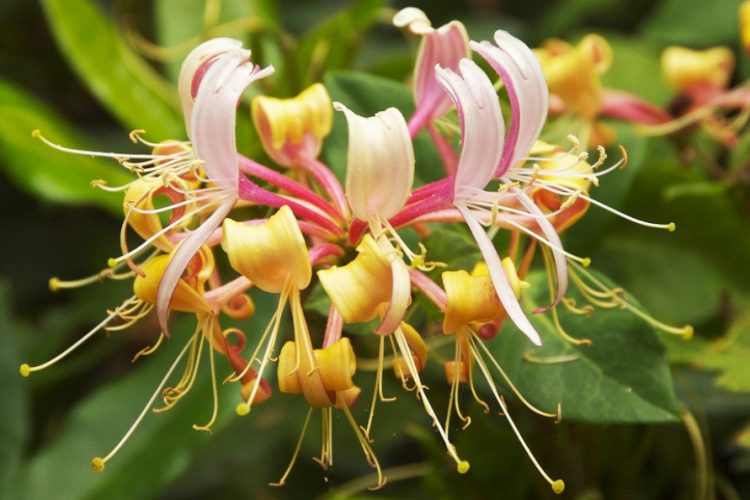 It is known that honeysuckle leaves have astringent abilities and also they can be used in the preparation of gargles and mouthwash.

Honeysuckle oil has excellent anti – inflammatory and antiseptic properties which are making wonders to relieve blemishes, poison ivy and skin rashes. Also it can give you a relief from sunburn and minor burns.

It is known that we can use the buds of honeysuckle flower as the natural treatment for many different digestion problems. Also in some studies are said that honeysuckle can help to prevent the breast cancer.

The honeysuckle oil is a natural cleanser and detoxifier and it can help to clean up the human liver from toxins, heat and wind.

The honeysuckle oil is extracted from the smelling shrub and it is great aromatherapy oil which can help to alleviate mental and physical stress which can leave you mentally calm and tranquil.

This health benefit of honeysuckle can help to fight against the bladder infection and it can ensure a smooth functioning of the respiratory system.

Many people suffer from depression at some point in their lives which is resulting in a significant deterioration of their quality of life. You can use the honeysuckle oil in aromatherapy because it can help to alleviate symptoms of anxiety and depression which could lead to overwhelming feelings of despair, reduced motivation and in some cases a reduction in the appetite. Antidepressants are not always an effective home remedy for depression because they have some side effects. The honeysuckle essential oil can be used to control the depressive symptoms and to help you stabilize your mood. When you use this oil in the aromatherapy, then it has a direct impact on the areas of your brain which control depression and anxiety.

Protection against viral and bacterial infections

The honeysuckle tea is having some elements that aid elimination of infection causing germs that cause salmonella, tuberculosis and strep infections.

The honeysuckle has the ability to assist in the maintenance of blood sugar levels.

It is recommended taking honeysuckle tea mixed with a little amount of honey because it will boost your immune system and it can help you to fight against many health problems, such as flu and cold in natural way. It can give you an instant relief from the high fever and it can help to soothe the sore throat and ease cough.