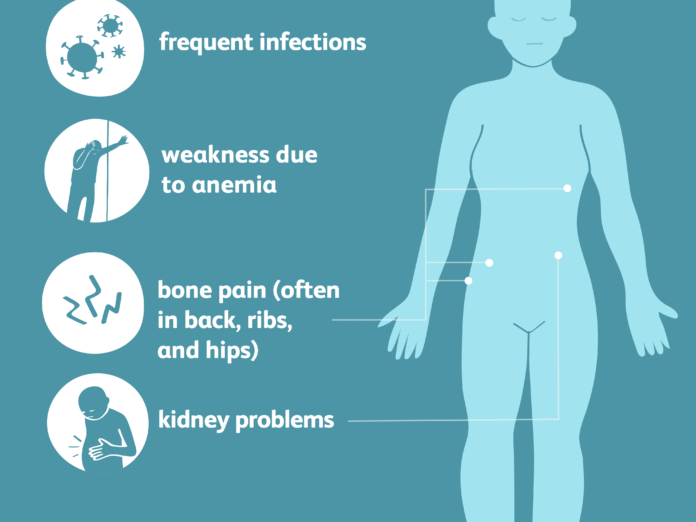 The multiple myeloma is a cancer which forms in the type of white blood cell known as a plasma cell. It is known fact that plasma cells can help you in the fight against infections by making antibodies which they recognize and attack germs. 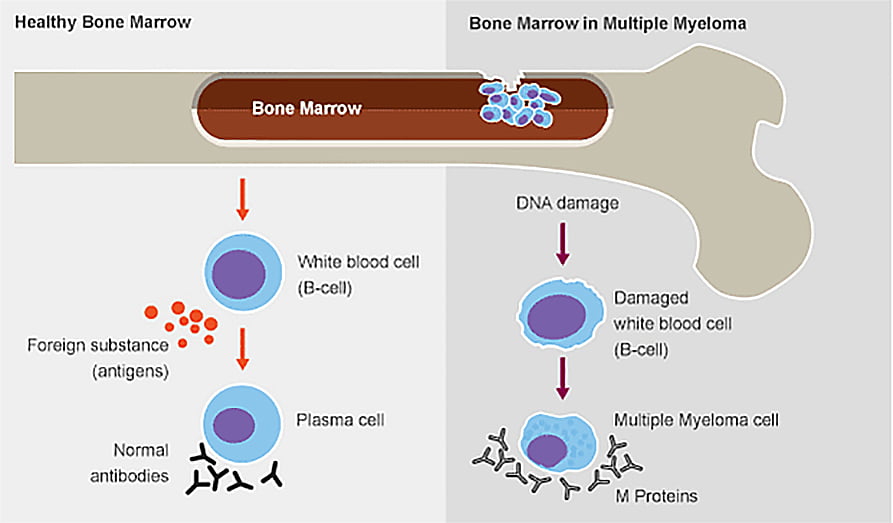 Weakness or numbness in your legs

Bone pain, especially in your spine or chest

You should visit your doctor if you have any persistent signs and symptoms which worry you.

It is not known what the cause for the multiple myeloma is. Doctors know that the multiple myeloma begins with the abnormal plasma cell in the bone marrow, which is the soft and blood – producing tissue which falls in the center of most of your bones. The abnormal cell is multiplying very quickly. The cancer cells do not mature and they do not die as the normal cells do, they accumulate, eventually overwhelming the production of the healthy cells. [1]

In the bone marrow, the myeloma cells crowd out the healthy white blood cells and the red blood cells which is leading to fatigue and an inability to fight against infections. The myeloma cells are continuing in their attempt to produce antibodies, as the healthy plasma cells do, but the myeloma cells are producing abnormal antibodies which the body cannot use. The abnormal antibodies (which are known as M proteins or monoclonal proteins) build up in the body and they cause problems, such as damage to the kidneys. Also, cancer cells can cause damage to the bones which is increasing the risk of broken bones.

There are some factors which can increase your risk of this myeloma, such as

Personal history of a monoclonal gammopathy of undetermined significane (MGUS): There are some studies in which are noticed that every year about 1% of people who suffer from MGUS in the USA develop the multiple myeloma [2].

Family history of multiple myeloma: There are some studies in which are shown that if a parent, brother or sister has a multiple myeloma, then you have increased risk of developing this disease. [4]

Male sex: It is noticed that men are having more chances of getting this disease compared to women. [5]

Black race: There are some studies in which are noticed that black people have two times more chances of getting multiple myeloma compared to white people. [6]

There can be complications caused by the multiple myeloma, such as

Low red blood cell count (anemia): The myeloma cells crowd out normal blood cells, so the multiple myeloma can cause anemia and other blood problems. [7]

Frequent infections: There are some studies in which are said that the myeloma cells can inhibit your body’s ability to fight against infections.

Reduced kidney function: It is noticed that this myeloma can cause problems with kidney function, such as kidney failure. The higher levels of calcium in the blood are related to eroding bones which can interfere with your kidney’s ability to filter the waste of your blood. It is noticed that the proteins which are produced by the myeloma cells can cause similar problems. [8]

Bone problems: The multiple myeloma can affect your bones which is leading to broken bones, thinning bones and bone pain. [1,2]

[6] Willyard C. How researchers are addressing the racial imbalance in multiple myeloma. Nature. 2020. Retrieved from www.nature.com/articles/d41586-020-03228-x