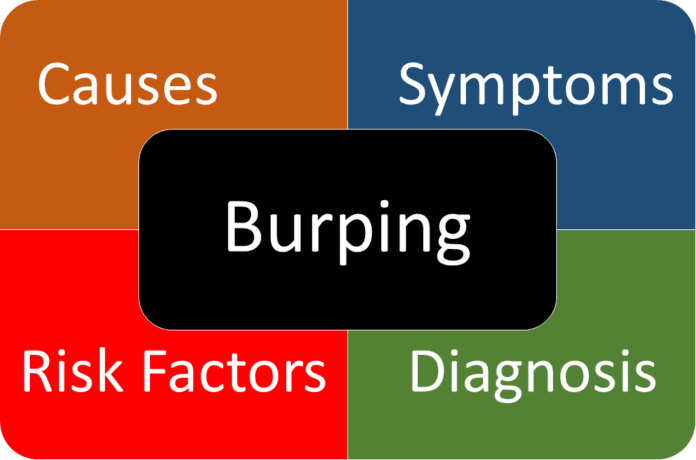 When you are releasing gas from the digestive tract trough the mouth, then this condition is known as burping. This condition is also known as erupt, belching, eructation and ructus. When you have a burping, then you have a typically sound which is coming from your mouth and also in some cases there is an odor. When your stomach expands due to too much swallowed air, then burping is releasing the air because in this way it is reducing the distention.

What causes burping? Burping is occurring when your stomach is filled with swallowed air. There are studies in which is shown that there can be many reasons why in the stomach are abnormal air which can be swallowed. [1,2] The main reasons for burping are

If you have babies or kids, then they can swallow large amounts of the air and they cannot notice it. This is a reason because parents are burping their babies after they have feed them. They should expel the excess air which they swallowed in their feeding [3]. But not just that you can belch when your stomach is full of air, but also you can belch when your stomach is not full of air. This is possible because there are many people who are using belch to reduce their abdominal discomfort and also their belching has become a habit.

Aerophagia: When you have involuntary or voluntary swallowing of air, then this condition is known as aerophagia. [4,5] As we have said previous, swallowing excessive amount of air can be caused by drinking or eating too quickly. Also this situation can occur in other situations when you are

Foods: There some kinds of foods and drinks which can be a reason for the burping such as alcohol, carbonated drinks, beans, onions, cabbage, foods high in sugar, fiber or starch which are causing a gas, bananas, lentils, peas, broccoli, cauliflower, whole-wheat bread and raisins. [6]

Medications: There are many medications which can be a reason for the frequent burping. Here we include medicines which are used for pain such as aspirin, naproxen and ibuprofen and laxatives such as sorbitol and lactulose.

Conditions: Also there are some medical conditions which can cause burping. These conditions can be some of the next:

When to see a doctor? When you have burping as a single syndrome, then you should not be worried about this situation. But if you are feeling that your abdominal pain is less or that your stomach has been relieved of distension, then you should not be worried about it. If burping is not relieving the distention or your stomach has been distended for a long period, then you must visit your doctor.

[3] Kaur R, Bharti B, Saini SK. A randomized controlled trial of burping for the prevention of colic and regurgitation in healthy infants. Child: Care, Health and Development. 2015;41(1):52-6.