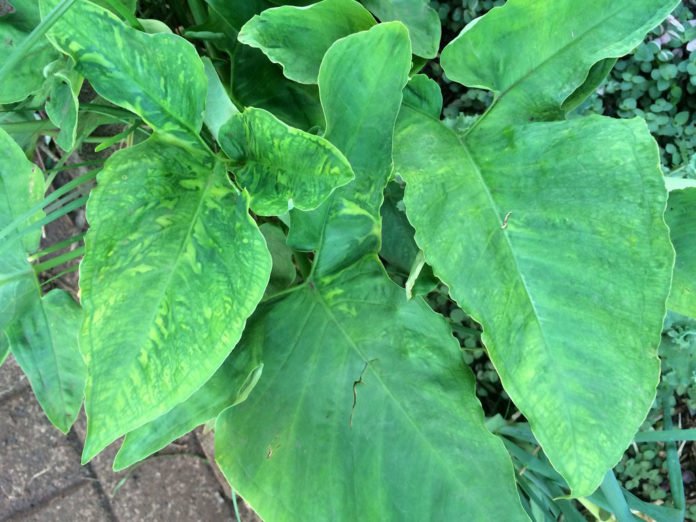 The leaves and stems of Tahitian taro are cooked and eaten as vegetables. They are cooked to remove the calcium oxalate crystals which are present in the leaves of aroids. The corms of Tahitian taro are not used for food because they are small and underdeveloped. This is a non – woody forb which grows about 0.6 – 2 tall. Tahitian taro has minerals, like selenium, manganese, copper, zinc, sodium, potassium, phosphorus, magnesium, iron and calcium.

Good for the gut

The Tahitian taro root has a lot of fiber and resistant starch. This means that it is beneficial to the gut. We know that the body does not digest or absorb fiber and resistant starch so they remain in the intestines. When they reach the colon, they become food for the microbes in your gut and in this way, the growth of good bacteria is promoted. When the gut bacteria ferment these fibers, then it is creating short – chain fatty acids which nourish the cells which line the intestines and they keep them healthy and strong. There are some studies done in people with inflammatory intestinal disorders, such as ulcerative colitis tend to have lower levels of short – chain fatty acids in their guts. There are some studies in which are said that consuming fiber and resistant starch can boost these levels and can protect against inflammatory bowel disease and colon cancer.

Help you to lose weight

It is known fact that the Tahitian taro is a good source of fiber. There are some studies in which are shown that people who eat more fiber tend to have lower body weight and less body fat. This can be due to the ability of the fiber to slow stomach emptying which is keeping you full for longer period and it reduces the number of calories which you eat throughout the day. This can lead to weight loss as the time passes. The resistant starch in the Tahitian taro root can have similar effects. There was one study in which was said that men who took a supplement which has 24 grams of resistant starch before meals have consumed 6% fewer calories and they had lower insulin levels after meals compared to the control group.

It is known fact that the Tahitian taro root has plant – based compounds which are called polyphenols. They have many health benefits, including the potential to reduce the cancer risk. Also, it has quercetin which also exists in large amounts in tea, apples and onions. Also, Tahitian taro has powerful antioxidants which protect your body from excessive free radical damage which can also lead cancer. There should be done a lot more studies in the future to show if the Tahitian taro can help you surely for the treatment of cancer.

This is a starchy vegetable, but it has two types of carbohydrates which are beneficial for the blood sugar management – fiber and resistant starch. Both of them can slow digestion and reduce the blood sugar spikes after meals.