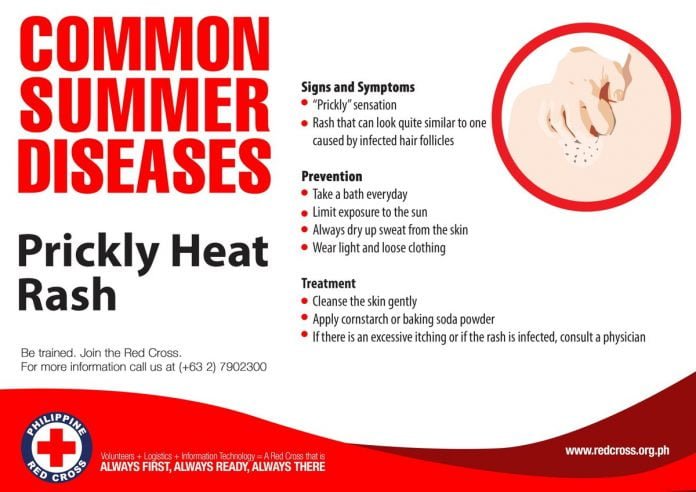 Prickly heat is also known as heat rash and miliaria. This is not a condition which is affecting just babies. Also it can affect adults, especially during hot and humid weather. This occurs when blocked pores – sweat ducts, trap perspiration under the skin. Symptoms of prickly heat can range from superficial blisters to deep and red lumps. There are some forms of the heat rash which feel prickly or intensely itchy. In the most cases heat rashes heals on its own. If you have severe form of prickly heat, then this needs medical care but the best way to get a relief from the symptoms is to cool your skin and prevent sweating. [5]

In infants, the heat bumps are mainly found on the chest, shoulders and neck. Also it can show up in the groin, elbow creases and armpits. Adults develop heat rashes in skin folds and where their clothing causes friction. The most common symptoms of heat rashes are red bumps on the skin and an itchy or prickly feeling to the skin. These symptoms are caused by the inflammation of the superficial layers of the skin – epidermis and the prickly sensation is similar to the feeling of mild sunburn. The symptoms of the heat rash are the same in adults and infants. We know that infants cannot complain about the rash sensation they have, so they can be fussy.

Causes: Prickly heat is happening when some of the sweat ducts clog. Instead of evaporating, the perspiration gets trapped beneath your skin which is causing inflammation and rash. It is not always clear why the sweat ducts become blocked but there are some factors which can play a role in it such as 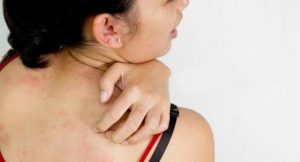 The types of prickly heat are classified according to how deep the blocked sweat ducts are. Signs and symptoms of each type vary.

Risk factors: There are some factors which can increase your risk of prickly heat such as

Complications: In the most cases prickly heat heals without problem but also there are some cases when it can lead to infection with bacteria that is causing itchy and inflamed pustules.