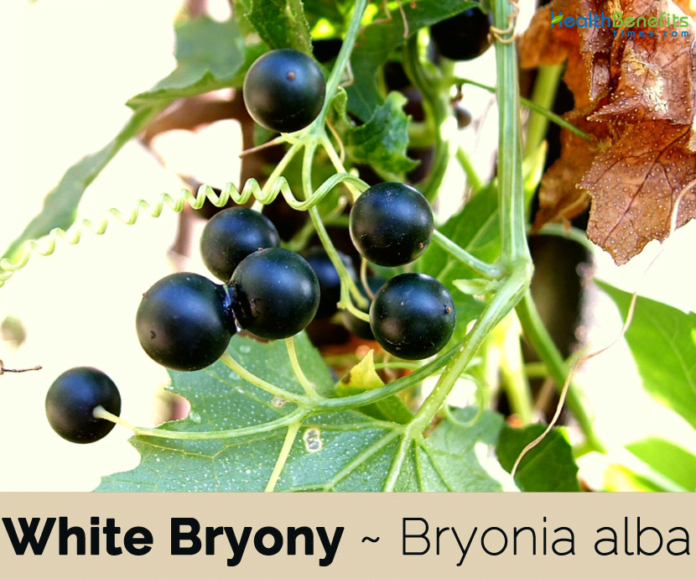 When it is fresh, it has a dirty yellow or yellowish-white color. When the white bryony is taken by mouth, then it can be very unsafe for children. When white bryony is applied to the skin, then it can cause redness, rash, dermatitis, and blisters, so you should be careful when you use it. The white bryony can lower blood sugar levels, so it is not recommended to be used by people who suffer from diabetes. The flowering season of white bryony is from May to June.

It has minerals like manganese, copper, zinc, sodium, potassium, iron, and magnesium. It has Vitamin C and Vitamin B9. Young shoots of white bryony are eaten, but you should be careful because they can be very poisonous. If you have an allergy, then avoid the white bryony. Here are some health benefits of white bryony:

It has been found that white bryony is an effective homeopathic remedy for treating the breast, which turns pale, hot, and firm. Also, these problems are accompanied by piercing pains, especially in nursing mothers or pregnant women.

Our joints, like the muscles, can become hot, distended, and rigid. They can be accompanied by many symptoms, such as sharp pain. This pain can be caused by different health problems, such as gout, arthritis, or tenosynovitis. They can be followed by any type of injury. It has been shown that the white bryony can help you to get relief from the symptoms of joint pain, but talk with your doctor for the correct way of using this home remedy.

Many people suffer from terrible headaches and a rupturing, splitting headache that is happening above the left eye or in the forehead. Even the slightest movement of their eye is leading to pain in the eyeball. This type of pain can gradually spread to other areas of the head and subsequently to the entire head. Usually, this condition is lasting for days. In these cases, people can have a dehydrated mouth and they can have increased thirst. The white bryony is one of the best natural treatments which you can use for the mentioned problems. Your doctor will tell you which will be the best dosage for your health without causing side effects.

The white bryony is one of the best homeopathic remedies for people who suffer from tremendous dehydration in the mouth, throat, chest, and mucous membranes that are irritated by the stabbing chest pain and irritating cough.

There are some cases when the white bryony is used to treat severe cases of appendicitis, so if you suffer from this condition, then talk with your doctor before you use it as your natural remedy.