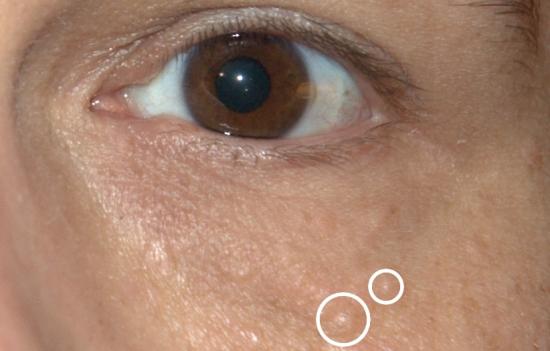 Syringoma is non – cancerous (also known as benign) bump, which is usually found on the upper cheeks and lower eyelids of young adults. Syringoma is completely harmless and is caused by an overgrowth of cells from sweat glands (known as eccrine glands). The syringoma is a skin-colored or yellowish firm rounded bump, which is 1 – 3 mm in diameter. The syringoma will start to appear in adolescence and they are more common in women than men. Also, in some cases, there is another affected member of the family.

The eruptive syringoma will appear abruptly in an adult’s life, as a crop of multiple lesions which typically happen on the chest or lower abdomen. Most patients with eruptive syringomas are dark-skinned or Asian people [1]. The syringoma can be confused with xanthelasma (this is cholesterol deposit on the eyelids), basal cell skin cancer, or trichoepitheliomas. The skin biopsy appearance under a microscope is characteristic and these small ducts with a comma–like tails look like tadpoles in the skin. The syringoma can be treated by laser or electrosurgery (diathermy). In some cases it can prove as successful, in other cases, it may not be successful, and it can result in small scars.

If they recur, they can be treated again the same way. Most cases of syringomas are not associated with symptoms. Some people can experience itching with sweating. The syringoma is benign so it does not require treatment. But, if they are disfiguring for you, you can visit your doctor and give you the right treatment for you.

The most common locations for syringomas include:

Typically, syringoma happens as small (one to three mm) flesh-colored to yellow bumps. Usually, they happen in clusters on both sides of your body and in an evenly distributed (symmetrical) fashion. The eruptive syringoma happens as multiple lesions which all develop at the same time, usually on the abdomen and chest. The syringoma will not cause pain and it will not itch. When you have any new skin growth, you should talk with your doctor to examine it in order to obtain a correct diagnosis.

The name syringoma is derived from the Greek word syrinx, which is used for pipe or tube. The syringoma is a benign tumor of sweat ducts (also known as eccrine glands) and these tumors lie in the mid to deep (known as dermal) layers of the skin. The majority of the syringomas are spontaneous. But, genetic (inherited factors) play a role in some cases. The inherited syringoma usually happens in preadolescence. The eruptive syringoma has been reported in people who suffer from Down syndrome [2].

Also, syringoma is associated with other rare genetic conditions, such as Brooke – Spiegler syndrome [3]. Usually, the treatment for syringoma is successful. But, syringomas are likely to recur and maintenance treatment may be necessary. The recurring syringoma can be safely treated again. The syringoma is benign so it does not need treatment, but if you do not like the appearance of your skin, then it can be treated. The aim of treatment is to reduce the visibility of the tumor rather than eliminate it completely and this will reduce the risk of scarring.

Excessive dyspigmentation (a too dark or too pale appearance), atrophic scarring (depressed) or recurrence, hypertrophic (thick) scarring are uncommon complications.