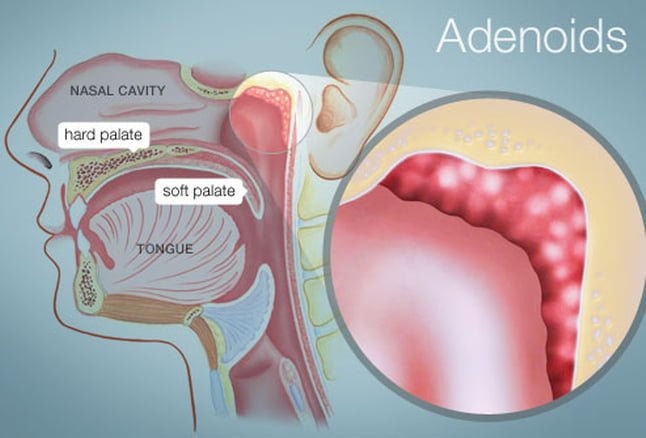 Symptoms of adenoiditis (enlarged adenoids) can vary depending on the cause for infection. Every single person can get a sore throat from time to time and there are some cases when the tonsils in the mouth can become infected. But our tonsils are not the only vulnerable glands in our mouth. Adenoids can also get infected. Adenoids are small patches of tissue which are located at the back of your throat. They are similar to the tonsils. Adenoids are located above them. We know that tonsils can be seen if we look at the back of our throat but adenoids are not directly visible. When your doctor is checking your adenoids, then he or she is using a special instrument with a light or a small mirror to see your adenoids. Also there are some cases when your doctor can make X – ray which will help him to see adenoids more clearly. Both tonsils and adenoids are part of our immune system which can help in the prevention and fight against infection in our bodies. If adenoids become enlarged, then they can cause problems. They are not the essential parts of our immune system. Generally, they can be treated by removing them. When your adenoids are inflamed and enlarged, then this condition is known as adenoiditis. When you have this condition, then it can make your breathing difficult and it can lead to recurring respiratory infections. Adenoids are playing an important role in keeping our health, but as we get older, they become less important because our bodies are able to fight infections in other ways. There are some studies in which is shown that adenoids get smaller around age five or six and they virtually disappear by the teen years [1]. Even though adenoids can filter out the germs from our bodies, there are some cases when they can get overwhelmed by bacteria and become infected. When this happens, then they also get swollen and inflamed. This condition of enlarged adenoids is known as adenoiditis. This condition is mostly affecting children but sometimes it can affect adults.

Enlarged adenoids can cause different symptoms such as

If you have noticed that you or your children have some of the mentioned symptoms of enlarged adenoids, then consult your doctor. Usually, this condition is treated with antibiotics. There are some cases when doctors recommend surgery when they have noticed that patients have not improved their condition.

Adenoids are present at birth and they grow until the child is between ages of three and five. They begin to shrink after the age of seven and this is considered as normal. Also they shrink considerably in the adulthood. [3] 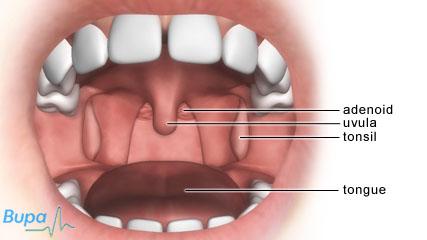 Adenoids are located in the passage which is connecting the back of your nasal cavity to your throat. It is known that they produce antibodies which can help your body to fight off infections. During the early ages, adenoids can protect infants from infection by trapping viruses and bacteria which enter their bodies through their noses. When the adenoids become infected, then they become enlarged but they will return to their normal size when their infection subsides. But there are some cases when adenoids remain enlarged even after the infection is gone. This condition can be also caused by allergies. Also there are some children who can have enlarged adenoids from their birth; your doctor can refer you to an adenoidectomy which is doctor specialized in ear, nose and throat surgery.  [4,5]