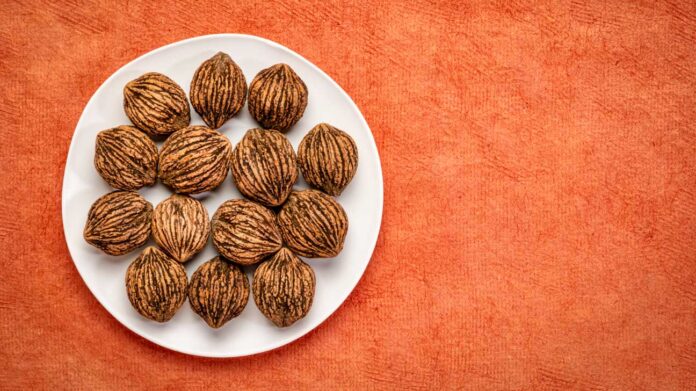 Legumes, nuts, and seeds are some of the healthiest foods around when they are consumed in moderation and one of the better nuts for health is the walnut. Walnut nutrition has been shown to help fight depression, improve brain health, and boost heart health, and more. But, there is a type of walnut, in particular, the black walnut, which provides some remarkable benefits of its own. The black walnut has been a nutritious addition to the diet of individuals since ancient times, from the Native American to Asian cultures.

Studies are focusing on the constituents, like polyphenols, quinines, and flavonoids, which are found in the kernels, which are known for their neuroprotective properties, antiatherogenic, antioxidant, anti-inflammatory, and antineoplastic properties. The scientific name of black walnut is Juglans nigra. It is also known as American walnut. It is a large hardwood species in the Juglandaceae family. It is native to eastern North America before spreading westward toward California. It can reach height up to 100 feet and deep roots as long as 10 feet, it adds to the stability and support for the black walnut tree but makes it difficult to soak up water. Here are some health benefits of black walnut: The black walnut gas quinines are associated with anticancer properties. Juglone is quinine that is found in the bark, roots, and leaves of the black walnut tree. The exocarp of the immature green fruit, bark, and branches has been used in China to treat gastric, lung, and liver cancer. Juglone blocks potassium channels which are promoting the generation of hydrogen peroxide and inhibits the transcription in the cancer cells. A recent study was shown that it can help to promote cell death in human colorectal cells and given black walnut juglone content, can make the black walnut potential cancer-fighting food.

The black walnut has tannins which have astringent properties. They are used to tighten the epidermis, mucous membranes and relieve irritation. There are different dermatological applications associated with the black walnut and they include poison ivy, tinea pedis, xerosis, psoriasis, acne, eczema, and viral warts.

The black walnut has juglone, which is one of the key active components in this nut. Juglone exerts its effects by inhibiting certain enzymes which are needed for metabolic function. It is highly toxic to many insect herbivores (it is often used by organic gardeners as a natural pesticide) and researchers have observed that black walnut can expel parasitic worms from the body. The black walnut is effective against threadworm, pinworm, tapeworm or ringworm, and other parasites of the intestines. This is a reason why the black walnut is a great addition to any parasite cleanses.

The black walnut is rich in ALA (alpha-linolenic acid). In 100 grams of black walnut, there are 3.3 grams of ALA. The black walnut is an excellent staple of the Mediterranean diet food list, which is a diet thought to be healthy in reducing mortality rates from coronary artery disease, which is low in Mediterranean populations. In some studies are shown that the frequent consumption of black walnut may have protective effects against coronary heart disease, because of the promising effects on blood lipid profiles.

In some clinical studies, diets supplemented with black walnut have noticed decreased serum concentration of low–density lipoprotein and cholesterol. Also, there are other potential protective constituents in black walnut, including alpha-linolenic acid, potassium, dietary fiber, protein, Vitamin E, and magnesium.

It has been noticed that the juice from unripe black walnut hull has been used in folk medicine for many years as a treatment for topical and localized dermatophytic fungal infections, such as ringworm. These fungal infections usually involve the keratinized tissues, such as nails, skin, and hair.