When you have swelling that is caused by excess fluid trapped in your body tissues, then you have edema. This condition can affect any part of your body but in the most cases your legs, ankles, feet, arms and hands are affected. There are many causes that can lead to this swelling such as pregnancy, medication or underlying disease (such as cirrhosis of the liver, kidney disease or heart failure). In the most cases you should reduce the amount of salt in your food and take some medication that can help you to rid of this condition. But also there are many home remedies and natural cures that will help you to have effective natural treatment. When the edema is caused by some underlying condition, then you should have separate treatment.

Here are the signs and symptoms:

If you have some of the mentioned signs and symptoms, then you should talk with your doctor as soon as possible. If you experience chest pain, difficulty breathing or shortness of breath, then you should seek immediate medical help.

Causes: When capillaries in your body leak fluid, then this happens. When your capillaries are leaking this fluid, then it builds up in the surrounding tissues which lead to swelling.

Mild cases of edema can be caused by 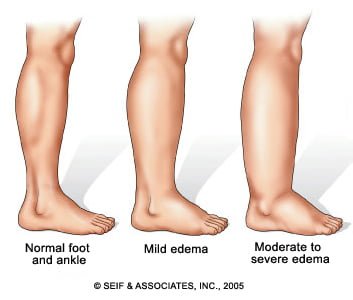 The white tongue is a coating of debris, bacteria and dead cells on the tongue which makes it to look white. Usually, the white...
Read more

In most cases people do not have serious problem with their stiff neck. In some cases they feel pain while in other cases they...
Read more

This is one of the most common causes for the heel pain. Plantar fasciitis involves inflammation of a thick band of tissue which runs...
Read more