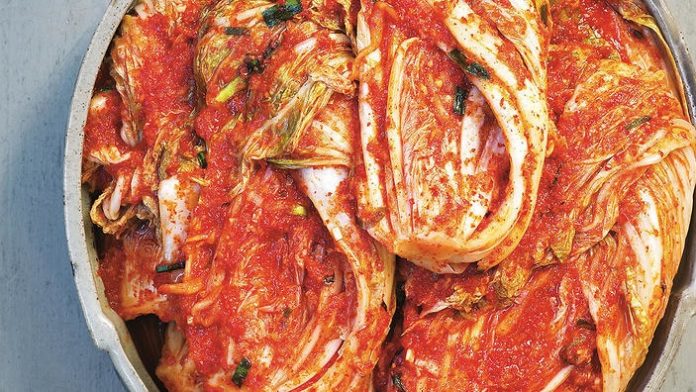 Kimchi can help you to have healthy digestive system and it can improve your heart health. It has many antioxidants which can help in the treatment of many conditions like gastric ulcers, atopic dermatitis, obesity, diabetes and cancer. It has flavonoids and probiotics which can boost the immune system, regulate cholesterol levels and delays aging. This is a low – calorie, high fiber and nutrient packed side dish. It is rich in many vitamins, such as Vitamin C, Vitamin B2, Vitamin B1 and Vitamin A. Also it is rich in essential amino acids and minerals, such as selenium, calcium and iron.

Kimchi is rich in antioxidants and it provides an additional benefit of probiotics as well in the formation of lactobacillus bacteria. It has many helpful components, such as isothiocyanates, flavonoids, carotenoids, chlorophyll, capsaicin and it has a low amount of sugar and fat. When you are consuming kimchi in excess amounts, then it can lead to digestive problems. Also excess amounts of it can aggravate the risk of developing gastric cancer. Also those people who are suffering from high blood pressure should be careful when they eat kimchi because it has high salt concentration which gets further accentuated during the fermentation process. Talk with your doctor if you have never used kimchi before you add in your diet.


Reduces gastric ulcers: Kimchi has therapeutic effects in gastritis and peptic ulcer disease which is caused by the Helicobacter pylori bacteria. There was one study which was conducted in this regard in which was shown the antagonistic activity of the kimchi attributes to the abundance of the Lactobacillus bacteria which is inhibiting the harmful pathogens from connecting to the human gastric cancer cells.

Weight loss: It has lactobacillus bacteria which are body is utilizing for the healthy functioning. Also this good bacterium is assisting in the weight loss by controlling the appetite and it is reducing the blood sugar levels. It has fiber which can keep your body full and your hunger satisfied for a longer duration which can prevent you from overeating.

Treats diabetes: There was one study which was done on high – fat – die – fed diabetes type 2 and in this study was discovered that those people who were taking kimchi that it has anti – diabetic properties. In this study was shown better glucose tolerance and lower levels of fasting glucose after people who suffer from diabetes have eaten a diet that has kimchi. Also it is proven that kimchi can be more useful in diabetic patients if it is eaten with low – fat or normal diet instead of high – fat food.

Prevents cancer: This food can help to reduce the risk of development of many cancers. There was one study which was performed on its samples and it has validated anti – cancer properties. The cabbage which is present in it has healthy flavonoids and we know that they can inhibit the growth of cancer cells. Also there are other very powerful cancer fighters in the cruciferous vegetables and in the cabbage that are glucosinolates. These components break down to form isothiocyanates which are known that they are very effective against cancerous cell growth. 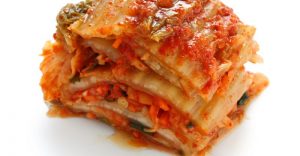 Anti – aging properties: The kimchi is known that it has anti – aging properties which can be attributed to the presence of Vitamin C and antioxidants. There was one study in which was revealed that kimchi can help to regulate and attenuating the inflammation which can speed up the aging process. In the same study was shown that this food has promising results because it can reduce the oxidative stress in the cells, extend the lifespan in the subjects and also it can inhibit the lipid peroxidation.

Boosts immune system: Kimchi has many nutrients such as phenolic compounds and flavonoids. There are many ingredients which are involved in the preparation of kimchi such as peppers, garlic and ginger which are known that are super – protectors and they are renowned for their beneficial effects on the immune system. It can help in the fight against infections and they are very effective in curing the symptoms of flu and cold.