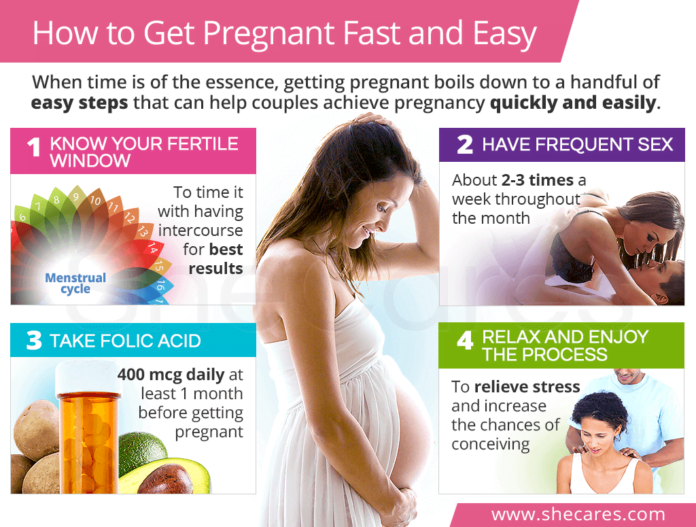 The time has come and you have decided that you should start a family. When you are ready to start a family, then the waiting is the last thing which you want to do. The Mother Nature has a hand in the timing, but there are some things which you can do or not to do, to help increase your chances of pregnancy. The first step of optimizing the women’s fertility is to take care of the body. Many doctors say that the most important advice for a woman who wants to get pregnant is to get know her body, especially her menstrual cycle. It is very important for women to know how far apart are her cycles, so she can more accurately time intercourse to try to get pregnant. If you and your partner are under the age of 35, then you have about 30% chances of conceiving in the first month of trying and an 80% chance in the first year. If it takes longer than a few months to get pregnant, then you should not despair. If you are 35 or older, then you have got a little less time to work with, so you should make appointment after 6 months.

How to get pregnant in natural and fast way 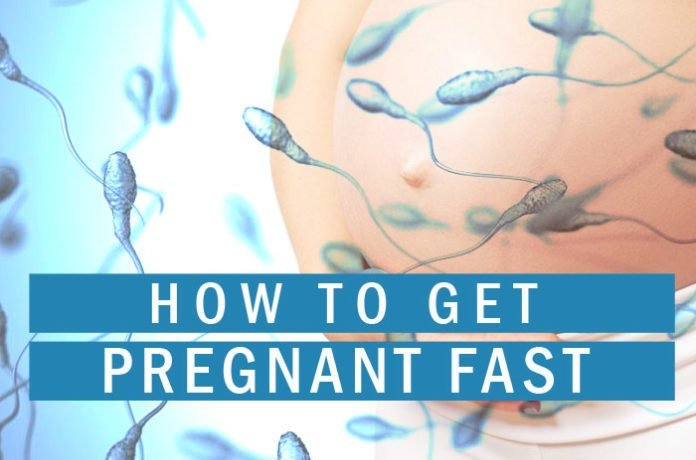 Talk with the gynecologist

You should talk with your gynecologist about prenatal vitamins which have folic acid and they can help you to stay protected from birth defects, such as spina bifida. The folic acid is working during the early stages of the pregnancy, so this is a reason why it is important to make sure that you are getting enough folic acid even before you get pregnant. You should do this cycle before you start trying to get pregnant. If you have some underlying problems, then they need to be under control before you can safely become pregnant. Also, you can eat foods which are rich in folate, such as green leafy vegetables, beans and whole grains like brown rice. [1]

Doctors are recommending to women who want to get pregnant, to record their menstrual cycles frequently. The woman who wants to have a baby should monitor whether the first days of her periods tend to come the same number of days apart every month, which is considered as regular. But, also there are some cases when the periods can be irregular, which means that the cycle length vary from month to month. When you are tracking this information on calendar, then you can better predict when you might ovulate, which means that it is the time when her ovaries will release an egg every month. The woman’s egg is fertile for only 12 – 24 hours after its release, while the man’s sperm can survive in a woman’s body for up to 5 days.

It is known fact that women who have regular cycles will ovulate about two weeks before the arrival of their periods. It is harder to predict the ovulation in women who have irregular cycles, but it is usually happening 12 to 16 days before the start of the next period. There are different methods which women can use to help determine their most fertile days each month. The home ovulation – prediction kits can take some of the guesswork out of figuring out when a woman is ovulating. The kit tests are sold in the drug stores and you can use them to know when you are ovulating. Also, there is another method to predict ovulation and that is to track cervical muscles, which is involving a woman regularly checking both the amount and appearance of mucus in her vagina.

If you have decided to start a family and you are wondering how to get pregnant quickly and naturally in a period of two months, then it is time to kick some of your less – desirable habits. For beginning, you should stay away from cigarettes. When you smoke cigarettes, then you inhale toxins, such as nicotine and carbon monoxide. The both toxins have a detrimental effect on the functioning of your reproductive system and blood vessels which is lowering your chances of getting pregnant. Also, the chances of getting pregnant drop further if you frequently drink alcohol. There are many different studies in which are shown that drinking alcohol can decrease your chances of getting baby [2,3].

It is very important to take extra good care of your body, so in this way it will be prepared to host a new baby. You should add a lot of nutrients in your body, so in this way you will be sure that it will be healthy. The balanced diet has all of the essential nutrients which are nourishing your body and it prepares for its pregnancy. Also, when you eat a balanced diet, then it will ensure that your baby will receive nutrients which it needs to develop properly. Also, when you reduce or eliminate sugary drinks and sweets, then they can keep your body primed for pregnancy. The sweet treats are increasing the blood sugar levels, which is forcing the insulin to rise and to deal with all the sugar. If you suffer from polycystic ovary syndrome, then this is especially dangerous. It has been shown that the high insulin can exacerbate PCOS which is causing a hormonal imbalance and it makes difficult for you to get pregnant [4].

Have sex every other day during the fertile window

The fertile window means a six – day interval, the five days prior to ovulation and the day of it. These are the days which every month the woman is most fertile. Some women are using new technology tools, such as fertility tracking apps and websites which can help them to keep tabs on when they may be more likely to conceive, but some studies have said that this may be not so accurate. There are some studies in which are shown that there has not been a big difference in pregnancy rates between couples who had sex every day during the fertile window compared to couples who did it every other day. Also, it is noticed that having a sex every other day may be easier for couples to pull off.

Do not worry about the best positions for getting pregnant

It is noticed that the best position for getting pregnant is just a myth. There is no a scientific evidence in which is said that the missionary position is better than women being on top when it comes to maximizing your chances of making a baby. In very rare cases, the woman’s cervix is in an unusual position where certain positions can make difference. There are some cases when it has been shown that certain gravity – defying positions, such as standing or sitting during the intercourse, may discourage sperm from traveling upstream. You should lie on your back after sex because the vagina naturally slopes downward and resting on your back after sex is allowing the sperm to pool there, which gives them an edge in swimming toward your egg. Some people think that the best time to get pregnant is in the morning when the sperm count is highest, but this is not proven, so you can have sex before you go to bed.

When you are exercising more, then you are keeping your body in a tip top shape. This can ensure that your body is ready to cope with the rigors of pregnancy and childbirth. Also, when you maintain a healthy weight, is an important part of a healthy pregnancy. When you are overweight, then this is reducing your chances of getting pregnant, because it interferes with ovulation. Also, if you are underweight, this can hurt the fertility. The body fat levels which are too low can interfere with the cyclical hormonal changes. If you are wondering how to get pregnant quickly and naturally in a period of two months, then you should start with healthy exercise regimen which does not ask your body to do too much. When you are getting too much exercise or when you do frequent strenuous workouts, then they can interfere with the ovulation, so you should be careful with your exercises. Doctors have noticed a lot of menstrual disturbances in women who exercise heavily and a lot of time, these women needs to cut back on their workouts if they want to become pregnant. [5]