Pomegranate seeds come from pomegranate. Pomegranate is a fruit which has a size of a large orange. It has smooth and thick skin which ranges in color from brownish-yellow to deep red. The inside of pomegranate has chambers of hundreds of arils and they are the seed pods inside the pomegranate which are separated by cream-colored membranes. These arils have juicy, brilliant – red fruit, surrounding tiny, crisp, and edible seeds. A single pomegranate can hold over 600 seeds. These seedpods are typically either eaten raw or processed into pomegranate juice.

Also, pomegranate seeds are used to make pomegranate seed oil, which has many positive health benefits, both ways, internally and externally. Also, white pomegranate seeds are available and they offer a much sweeter, less tart flavor. You can eat the creamy white pithy part surrounding the seeds, but it is quite bitter. You can juice pomegranates very easily, but be sure to avoid consuming the tough outer skin. There are many nutrients in pomegranate seeds, such as potassium, folate, Vitamin C, and Vitamin K. Also, they are low in calories and high in heart-healthy fiber. 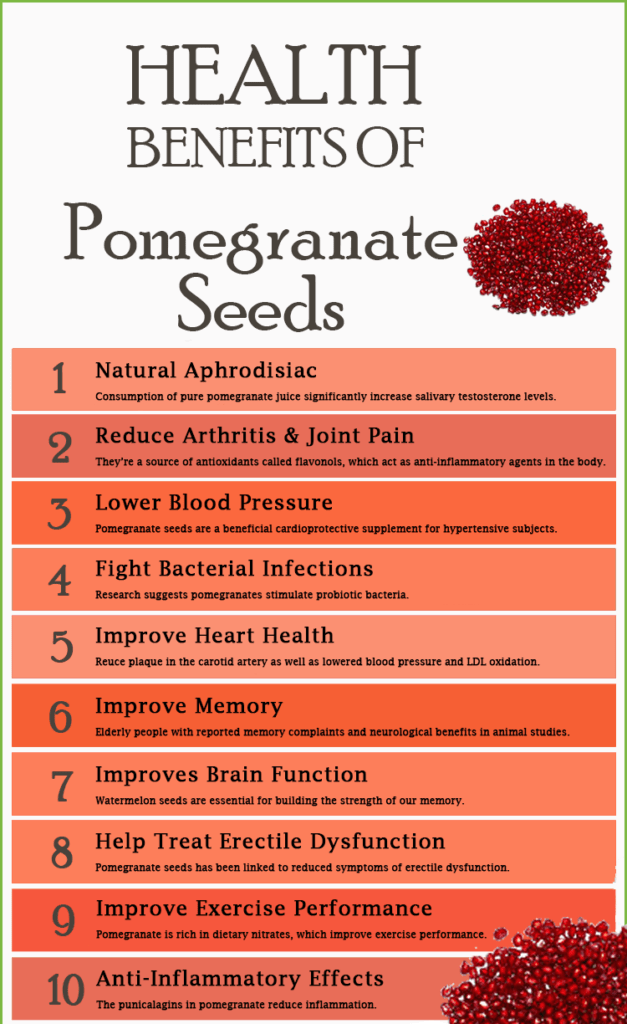 Here are some health benefits of pomegranate seeds:

In some studies are shown that polyphenols, which are found in abundant amounts in pomegranate seeds and their juice can enhance cognitive function. Pomegranate polyphenols could provide long-lasting protection from memory dysfunction caused by heart surgery. In another study was found that elderly individuals with memory problems who drank eight ounces of pomegranate juice or a flavor–matched placebo drink for four weeks, had significantly improved markers of verbal and visual memory.

The juice made from pomegranate seeds has antioxidants that are higher compared to many other fruit juices. This can help to block the buildup of cholesterol in arteries for people who have a risk of heart disease. In some studies are found that the effects of pomegranate juice in people with carotid artery stenosis (it is a narrowing of either of the two key arteries located in the front of the neck through which blood from the heart goes to the brain) can help to deal with this condition.

After one year was noticed that the juice of this fruit is effective at lowering blood pressure levels by over 12% and reducing atherosclerotic plaque by a whopping 30%. People, who did not drink pomegranate juice, have noticed 9% increase in atherosclerosis plaque, suggesting that pomegranates could potentially offer protection against heart disease.

Pomegranate extracts have been used since ancient times to treat many different conditions, including parasitic and microbial infections, respiratory complications, hemorrhages, canker sores, ulcers, and diarrhea. Also, it has been shown that pomegranate seeds can stimulate beneficial bacteria in the gut. This can enhance the ability to fight against bacterial infections.