The scientific name of snow fungus is Tremella fuciformis. It is a wild, edible fungus which is native to tropical and subtropical regions around the world, but extends into temperate areas in Asia and North America. It is known that the snow fungus grows throughout the South and Central America, the Caribbean, parts of North America, sub – Saharan Africa, southern and eastern Asia, Australia, New Zealand and the Pacific Islands. The snow fungus is also known as bai mu erh, white jelly mushroom, silver ear fungus, snow ear, white tree – ear, etc.

It has the ability to encourage the cell growth and it can help in the wound healing. Also, It is high in Vitamin D, which is another factor that aids in alleviating skin abrasions. 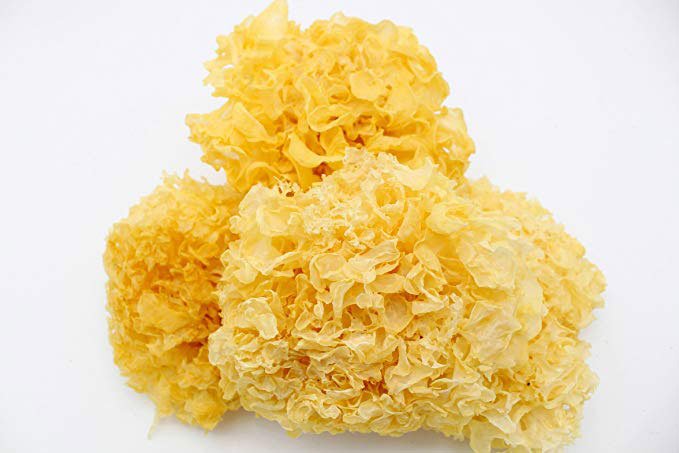 Those people who have sensitive skin can use it as their natural treatment. It naturally breaks down harmful free radicals in the skin and it decreases the inflammation. It can recover the overall complexion. Typically, the snow fungus does not cause skin reactions, which makes it milder than chemicals found in the traditional beauty products.

It will offer hydration to your skin. It can help to keep your wrinkles at bay. It can help your skin to have the moisture as much as possible. It will help you to have smooth skin surface and it will make you to look younger. The increased elasticity is reason why the snow fungus is so much popular right now. Also, it has anti – aging benefits which is another reason why you should use it.

It has been shown that it has polysaccharides which can prevent and treat neurodegenerative diseases like Alzheimer‘s disease. It can improve the neurite outgrowth, which is encouraged by the nerve growth factor. It can reduce the neurotoxic effect and it can reactive oxygen species accumulation.

it has polysaccharides which can help to reduce the plasma glucose levels. It can increase the glucose disposal, improve glucose tolerance and systemic insulin sensitivity without affecting the body weight.

It has been shown that this plant is rich in polysacharrides which can help to boost your immunity. It can help to improve the secretion of interferon and interleukin which is vital immune system component that provoke the manufacture of germ consuming macrophages. Also, the snow fungus can improve and enhance the action of natural killer cells which are type of white blood cells that can safeguard your body from bacteria and viruses. Also, it can improve the effectiveness of antibodies which are used by the immune system to fight against bacteria and viruses. The snow fungus is very effective for old people who have a weakened respiratory system and for dry coughs.

There are some studies in which are shown that the snow fungus is beneficial in healing of atherosclerosis by stimulating the DNA synthesis in vascular endothelial cells, which are cells that line the interior surface of blood vessels. The dysfunction of these cells is a major factor in the pathogenesis of atherosclerosis, hypertension and thrombophlebitis. It has been shown that it can help to protect the endothelium cells from histamine damage and increase the clotting time.