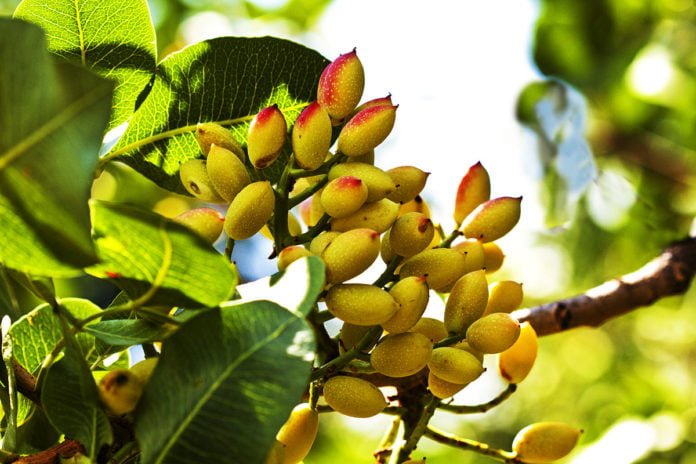 Pistachios have many health benefits such as improve digestion, protect against diabetes and hypertension, weight management and it can help to have a healthy heart. Pistachios are one of the oldest nuts which are used in many parts of the world. They are native to Asia, particularly to Iraq and Iran. They are produced in Iran, Iraq and Syria but nowadays they are produced in many countries all around the world such as China, Turkey, Australia and United States of America, among others. Pistachios are rich source of nutrients such as zeaxanthin, lutein, beta – carotene, Vitamin B6, thiamine, potassium, phosphorous, dietary fiber, fats, proteins and carbohydrates. But also they are rich in other nutrients such as Vitamin K, Vitamin A, Vitamin E, folate, pantothenic acid, niacin, riboflavin, Vitamin C, manganese, copper, zinc, magnesium, iron and calcium. Nowadays you can find pistachios in many different form such as salted, sweetened, unshelled or shelled form.

Absorption of iron: These nuts are rich in copper which helps in the higher absorption of iron into our bodies from food sources. This is very helpful to combat conditions such as anemia.

Defense against diabetes: Pistachios function in controlling diabetes. People who suffer from diabetes the sugars in their bodies form inappropriate bonds with proteins and they are making them unusable. This process is called glycation. Pistachios have antioxidants which help to reduce the process of glycation and they can help in the control of diabetes.

Antioxidant properties: It is found that even the shells of pistachios have a considerable amount of antioxidants. It is known fact that antioxidants neutralize free radicals which form in the body after cellular metabolism and they can cause serious diseases such as heart disease and cancer.

Aphrodisiac properties: There are some studies in which is shown that these nuts greatly influence sexual vitality in men. In these studies is shown that men who had a daily intake of about one hundred grams of pistachios for 3 weeks, have improved their erectile function by around 50%. This condition was confirmed with ultrasound scans of blood flow in the penis.

Eliminates skin dryness: These nuts help in eliminating skin dryness. In this aspect the saturated fat plays a major role. This fat also acts as a good carrier or base oil because it is used in traditional therapies such as traditional massage therapy and aromatherapy.

Reduced risk of age – related macular disease or AMD: These nuts have carotenoid antioxidants such as zeaxanthin and lutein. They can help in reducing the risk of contracting age – related macular disease in older people. This was shown in some studies which were done in the United States of America. You can include the pistachios along with vegetables for an increased supply of zeaxanthin and lutein.

Weight management: Many people who are on diet are using pistachios as their first choice for consumption. There are many studies in which is shown that pistachios with their high unsaturated fats, low saturated fats, high protein and lower calories are ideal food compared to other nuts and dried fruits which are used by people who are on diet for their ideal weight management.