Treats ulcers: There are some studies in which is shown that the regular consumption of coconut milk can lead to reduced size of stomach ulcers and also it was found that it can be successful as a pharmaceutical treatment. People, who prefer natural remedies, should use coconut milk as one of the best home remedies for ulcers of any kind.

Protects heart: There are some studies in which is shown that the coconut milk has high amounts of medium – chain fatty acids and this milk has high – fat content but these are good fats which can help to stabilize heart health. When we consume coconut milk in moderate amounts, then it can lower the bad cholesterol levels and it can increase the levels of good cholesterol in your body, which will prevent atherosclerosis and it will lower the risk of strokes and heart attacks.

Reduces inflammation: It is known fact that there are many traditional uses of this type of milk which are related to inflammation, particularly if you a chronic sufferer of headaches, gout, arthritis or irritable bowel syndrome. It has antibacterial properties which can help to neutralize the underlying infections. Also it has anti – inflammatory properties which can soothe the discomfort, redness and swelling.

Improves circulation: This natural cure is an excellent source of iron, which is required by our bodies for the production of the red blood cells. Also it can prevent anemia because it can increase the blood flow and oxygenation to those areas of our bodies which need resources at most. 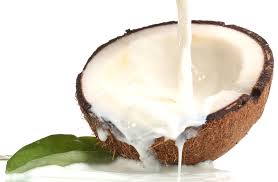 
Aids in digestion: When we make this milk at home, then the most of the dietary fiber is strained out and there are still some benefits to the digestion system which can help the regular consumption of the coconut milk. Also it has natural anti – inflammatory properties that will help you to reduce the stomach discomfort and it will promote better bowel movements and in the same time it will give you a relief from the constipation.

Weight loss: Coconut milk has specific types of fatty acids which are able to increase the metabolism in many different ways while at the same time, it can suppress the hunger. This will result in a lower calorie intake over the course of the day. When you are increasing the calorie burning on a passive level, this will help you to lose weight even if you are not exercising.

Boosts energy: Coconut oil has medium – chain fatty acids which are found in high amounts and unlike other forms of fat, this is directly metabolized by your liver and the by – product of it is ketones. But in the coconut milk there are more concentrated and healthier packets of energy which can give you the both – physical and cognitive boost when you need it at most.