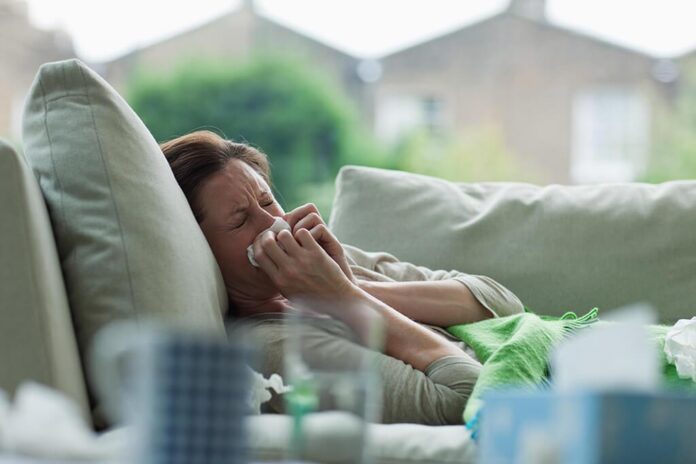 There are many chronic respiratory conditions, environmental irritants, and acute illnesses which are characterized by excess mucus. Mucus is mistaken with saliva in many cases, but these two substances are not the same. Mucus has dead cells and debris from the upper and lower respiratory tract, trapping them, so they can be coughed up and cleared from the lungs.

Also, there are some lifestyle risk factors, such as indoor or outdoor fumes or workplace emissions, indoor air particles, outdoor air pollution, and tobacco smoke. In some cases, a combination of factors can play a role when it comes to increased mucus production. If the amount of mucus in your body makes you feel uncomfortable, then this may be a sign of some serious problem, so you need to check it with your doctor. But, usually, mucus is not a symptom to worry about if it is the only symptom.

Use a nasal saline spray

This home remedy can help to rinse and hydrate tissues in your nose and sinuses, so you can use it as your natural treatment for increased mucus production. You can also gargle with a mixture of salt and warm water because this can help to remove phlegm and mucus from the back of the throat and ease symptoms. You should add half a teaspoon of salt to a cup of warm water. You should stir it until the salt dissolves. You should gargle with this mixture and allow it to sit in the back of the throat momentarily. You should repeat it several times a day as needed.

You should be sure that filters are clean and functioning well, so this will keep dust and other potential irritants out of the air.

This is one of the most popular home remedies for increased mucus production because it has antiviral and antibacterial properties. One study done in 2007 was shown that buckwheat honey has a good effect on upper respiratory tract infections in children. Parents have reported that honey gave their children the best relief from the symptoms, compared to the standard medication or no treatment.

It has Omega – 3 fatty acids and they can help to reduce inflammation and phlegm.

This natural cure is a good source of unsaturated fat and it has oleocanthal, which can produce effects similar to anti-inflammatory medications. You should add olive oil in your cooking too.

You can elevate your head using extra pillows if an excess of mucus in the chest is disrupting sleep. The elevation can reduce coughing and discomfort and it can promote mucus drainage.

You should stop with the tobacco smoke because this can aggravate mucus production even more.

They can help you to stay hydrated, so you will easily expel mucus by coughing. In one study done in 2008 was shown that hot beverages can provide immediate and sustained relief from the congestion and accompanying systems, such as chills, sore throat, nagging cough, and sneezing. You can get your benefits from warm water, herbal teas, decaffeinated black or green tea, and broths. You can easily find them at your local stores, so you should not doubt adding them to your diet as your natural treatment for increased mucus production.

This can help your body to moisturize your throat and nasal passages and it can help to reduce phlegm and mucus production. If you have difficulties with sleeping, then you will benefit from the humidifier. But, to maximize this benefit, you need to keep your windows and doors closed.

Have a hot shower

You can take a hot shower or bath because this will fill the room with steam and it can help to alleviate symptoms.

Some of the most common foods that are used in the fight against increased mucus production are including lemon, ginger, garlic, and species, such as ground cayenne and other types of chili pepper. In some studies is said that the next foods can help in the treatment of increased mucus production, like zinc, pomegranate, licorice root, Echinacea, guava, ginseng, and berries. Those people who are taking prescription medications should talk with a doctor before they try new supplements in their diet. There are different supplements that can be used in the natural treatment of increased mucus production, such as zinc, licorice root, Echinacea and ginseng.

The deep breathing exercise is involving taking prolonged breaths to help your lungs expand as you inhale and to push out the excess air as you exhale. This is one of the most commonly used techniques for clearing lung secretions. Your therapist can teach you deep breathing techniques which you can do at your home on a regular schedule.

They can help you in the natural treatment of increased mucus production.

Decongestants dry secretions, but they can make it more difficult to reduce mucus, so avoid them.

This is a therapeutic technique that engages the chest and stomach muscles in a way that improves mucus clearance. There are two common methods of controlled coughing – deep coughing and huff coughing. For the deep coughing, you should sit comfortably in a chair with your feet on the ground. Then, wrap your arms around your stomach and inhale deeply. You should keep your lips pursed, emit a forceful cough while compressing your arms firmly against your stomach muscles.

This is forcing the diaphragm to do more of the work. For the huff coughing, you should take a deep and slow breath to fully fill the lungs. Then, tensing your stomach muscles, you should make three rapid exhalations with your mouth open, making the “ha” sound with each exiting breath. You should continue repeating this and keep your core firm until you feel the mucus breaking up. Then, you can take a deep cough to clear your lungs.

This vitamin can help to improve your immune system and it can help you in the fight against increased mucus production.

This will improve your immunity, which can help to decrease mucus production.

N – acetylcysteine is a supplement that can be used to thin the mucus in the airways and it can reduce the severity and frequency of a cough. NAC can be used in the treatment of increased mucus production.

When you keep the air moist, then this can help to loosen the mucus and it will reduce coughing and congestion. You can use a steam vaporizer. You can fill a large bowl with hot water. You should lean over a bowl and then drape a bowel over the head to contain the stream. You should gently inhale the steam to loosen the mucus. You should breathe in the steam for as long as it is comfortable and then drink a glass of water to prevent dehydration.