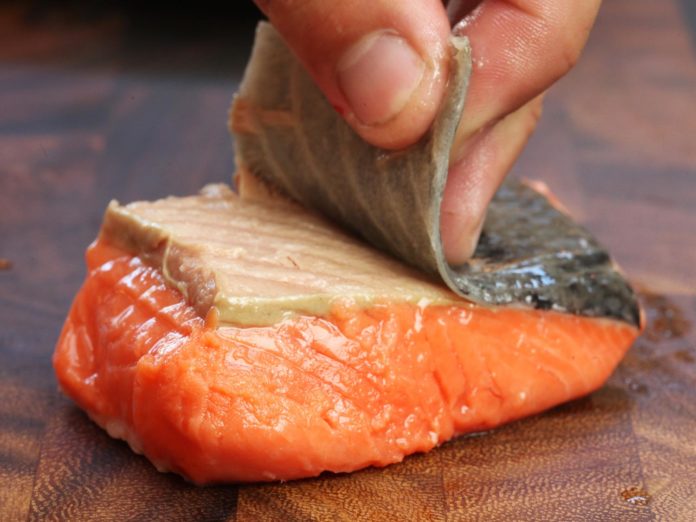 Salmon has many health benefits such as efficient body metabolism, boosted eye health, correct muscle and tissue development and include proper cardiovascular health. This is a species of fish which is found in saline water and fresh water which depends on the stage of the salmon development. Oncorhynchus is the scientific name of the salmon family but also it has other suffixes which depend on the variety of salmon such as Pink Salmon and Cherry Salmon. Thus is the best source of Omega – 3 fatty acids which you can add in your diet. They can keep your body healthy and safe. It has Omega – 3 fatty acids which can reduce the inflammation of digestive system and arteries which will reduce the chances of getting kidney, prostate and colon cancer. It can improve the texture of your skin. It can give a sparkle to your nails, hair, skin and eyes and it will help in the growth of beneficial bacteria in your colon. It is known fact that the fatter the salmon is the healthier and nutritious it is. This is one of the best protein supplements for sick or old people because it is easy to digest. In some parts of this world, salmon is cheaper than the other sources of animal proteins such as poultry and red meat. This fish is not known of any side effects, because they do not have carcinogenic components like other meats have. This fish is rich with potassium, biotin, Vitamin B5, Choline, iodine, Vitamin B6, phosphorous, protein, Omega – 3 fatty acids, Vitamin B3, selenium, Vitamin D and Vitamin B12.

Eye care: Salmon is rich with the Omega – 3 fatty acids and amino acids which can help you in the prevention of fatigue of the eyes, loss of vision, retinal dryness and macular degeneration. It is a proven fact that people who eat fish at regular basis have better vision compared with people who do not eat fish.

ADHD prevention in children: There was one study in which was shown that children who eat this fish at regular basis have the same brain benefits as their parents. There was another study in which was shown that when preschool children have eaten salmon, then this helped them to boost their academic performance and prevent ADHD symptoms. You should give your children salmon as part of their diets because they can have better focus and they will remember more things.

Brain and nerves: It has Omega – 3 fatty acids which can improve your memory, increase the efficiency of the brain functions and keep your brain active during long working hours. Salmon has selenium, Vitamin D, Vitamin A and amino acids that can protect your nervous system from damage which is related to aging. Also it acts as antidepressant that will help you to relax your brain. Also it will help you in the treatment of Parkinson’s and Alzheimer’s disease. It is said that people who eat fish are more intelligent than people who eat meat.

Metabolism: Salmon is rich with selenium, Vitamin D and Omega – 3 fatty acids that can help you to manage the insulin levels throughout your body which will facilitate the absorption of sugar which means that it will lower your blood sugar levels.

Bones and joints: There are some studies in which is shown that Omega – 3 fatty acids that are present in the salmon can keep the osteoporosis at bay. It was made a study in which was shown that women who have higher levels of Omega – 3 fatty acids in their blood have experienced fewer hip fractures. You should eat this delicious fish salmon on regular basis because it can keep your bones strong.