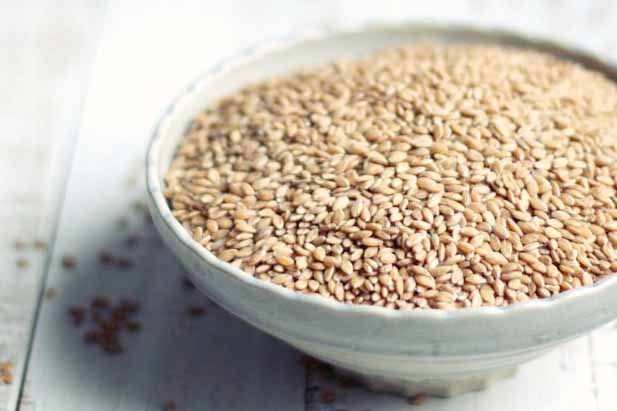 Einkorn is covered wheat. It is thought that ancient grains are more nutritious than modern varieties of corn. The most ancient wheat is Einkorn, which offers many essential dietary and trace minerals. It is a good source of thiamine, dietary fiber, iron, protein, and many B vitamins. Also, it has a significant amount of the powerful antioxidant lutein, which has higher antioxidant levels compared to durum and bread wheat.

There is a much lower ratio of nutrient depletion during the processing of einkorn. It can be substituted for whole wheat flour in most recipes, but it may result in a different texture. But, the results are worth exploring, especially since the nutritional benefits likely outweigh other options. In a 100 gram serving of Einkorn flour, there are 6.7 grams of fiber, 333 calories, 4 mg niacin, 66.7 grams of carbohydrates, etc. It is best to be sure that the Einkorn flour is safe for you, especially if you are sensitive to gluten.

Einkorn flour is not gluten-free, so it is much more easily digested and often fine for most people with gluten intolerance symptoms to eating. If you do not have celiac disease, then Einkorn flour is one of the best choices for your diet and it is definitely better than eating whole wheat. You can use Einkorn flour instead of wheat flour in most recipes. It is a smaller and softer grain, so be prepared to sift your flour twice.

People, who have sensitive tummies, should add Einkorn flour to their diets. It is easier to digest than wheat, which is mass-produced, especially in the USA, due to the lower levels of gluten. This is also good for endurance athletes because they often look for grain-like carbs, which are easy to digest before racing.

The wholemeal flour of Einkorn flour and wheat is high in phenolic acids. Phenolic acids have the ability to protect our bodies from oxidative damage and diseases, such as cancers, stroke, and coronary heart disease.

May help delays the onset of type 2 diabetes:

One study done in Denmark were tested the physiological effects of ancient wheat whole grain flour for diets on the development and progression of type 2 diabetes, especially to look at the glycemic responses. The intervention study was conducted, including the consumption of five different diets (including refined wheat, rye flour, spelled, einkorn and emmer) for a period of nine weeks. This testing revealed the downregulation of hepatic genes.

It is a process by which a cell decreases the quantity of a cellular component in response to an external variable. The rye and spelled induced a low acute glycemic response. The wheat had higher total cholesterol and HDL cholesterol levels. In this study was concluded that ancient wheat diets decreased the cell production relating to glucose and fat metabolism, equivalent to prevention or delay of diabetes development. It is a good idea to add Einkorn flour to the diet plant of people who suffer from diabetes.

Einkorn flour has rich nutritional elements which are good for our bodies. The Einkorn whole meal is rich in unsaturated fatty acids and protein, fructans, and trace elements, like iron and zinc. Also, it has several antioxidant compounds, which are a combination with trace elements, can help you to lose weight.

It is noticed that the number of wheat–allergic people has increased in recent years. This is increasing the need and desire for less allergenic wheat varieties. In some studies is said that the Einkorn flour is less allergenic.

In some studies are found that lutein, zeaxanthin, and beta–carotene, which are found in the Einkorn flour, may be protective in eye disease because it has been shown that they have the ability to absorb damaging light that enters the eye. This is giving the idea that the wheat sprouts could be potential functional ingredients to increase the nutritional value of cereal products.