Gingko biloba is part of the Gingkoaceae family. Its origin is from China. It is also known as Silver apricot and Maidenhair. It is thought that gingko biloba is one of the oldest species to the grace planet earth. It is considered as a living fossil which is specie that has successfully survived major extinction events that the mother earth has seen to date. In the Ancient China, gingko biloba was used as a food. This natural cure is mainly used in the preparations of medicines for conditions, such as reduced blood circulation to the body and brain and Alzheimer’s disease. Also it can be used to treat memory loss, mood swings and several other cognitive disorders. This natural cure was transformed into teas, capsules and tablets and after this is extensively used. The seeds and leaves of gingko biloba are mostly used for their different benefits. The extra dose of gingko biloba can cause minor problems, such as cramps, indigestion, dizziness, vomiting and nausea. But there are some cases when are noticed serious damages, like heart stroke and semi – permanent allergies.

Some home remedies for gingko biloba:

Fights fibromyalgia: When gingko biloba is taken with CoQ10, then it is very effective natural treatment for fibromyalgia. This is a disorder of the nervous system which is accompanied by depression, insomnia, anxiety, headaches, fatigue and severe muscle pain.

Heals hemorrhoids: People who experience painful hemorrhoids can use gingko biloba as their natural treatment for this condition. You should apply this natural cure topically on the anus and rectum because it helps to relieve bleeding, pain, inflammation and swelling in the area.

Improves libido: This natural cure is used by people who have impotence, lack of sexual desire and erectile dysfunction. Also it can enhance the libido in both men and women. Gingko biloba has positive effects on the hormones, particularly on the serotonin levels. This is making gingko biloba an effective treatment for people who are experiencing an unsatisfactory performance in the bed. Also this natural cure has the potential to dilate the blood vessels and it can improve blood flow to the genitals. 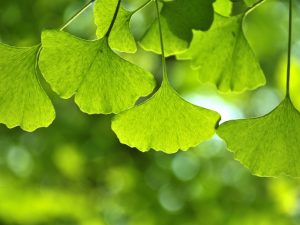 Helps prevents ADHD: This natural cure is beneficial for preventing and treatment of dyslexia and ADHD. This herb can improve the brain function by improving the physical performance, memory and concentration. There are some studies in which are shown that gingko biloba can reduce physical and behavioral symptoms in people who suffer from autism which is making it a potential factor in the treatment of this condition.

Reduces PMS symptoms: There are some studies in which are shown that gingko biloba can fight against the symptoms of PMS, such as fatigue, anxiety and mood swings.

Fights anxiety and depression: This home remedy has the ability to handle with the stress elements by counteracting the effects of the uncontrolled production of stress hormones, such as cortisol and adrenaline. This herb is adaptogen. Gingko biloba assists in the body’s ability to cope with the external disturbances in natural way. Also this natural cure can help in the treatment of panic attacks, social phobias, generalized anxiety disorder and seasonal depression.

Helps increase concentration: There are many studies in which are said that gingko biloba has the ability to combat brain fatigue and cognitive decline. Also it is very effective in the treatment of cognitive condition known as cerebral insufficiency, which have symptoms such as mood swings, poor physical performance, frequent headache, chronically low concentration and confusion.