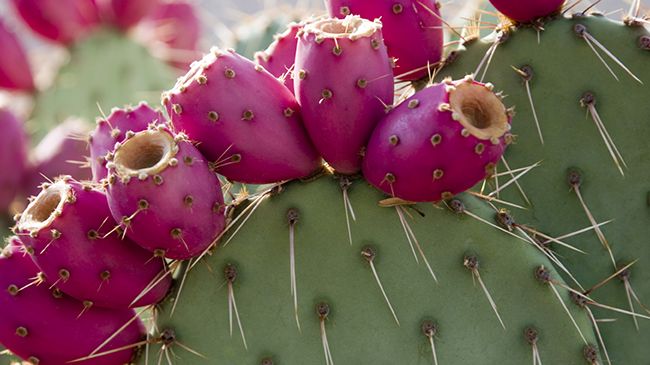 Prickly pear belongs to cactus family. It has many health benefits. This fruit grows on the leaves of the Nopales cacti which belong to the genus Opuntia and the scientific name is Opuntia ficus – indica. Prickly pear in Hindi is referred as Nagfani. The younger parts are edible and very often they are part of the Mexican cuisine. The leaves, stems and flowers are other edible parts of the prickly pear cactus. Prickly pear is widely known as cactus pear. In different countries it has different names such as Indian figs, Barberry figs, Nopales, Nopal and Tuna. It is a cylindrical fruit which has a firm outer skin with barbs and softer inner flesh which is edible. Prickly pear is initially green and it turns reddish – pink as it matures for most plants. You can eat in raw form or you can boil or grill it. The most common side effects of prickly pear are headache, bloating, diarrhea and upset stomach. If you have allergy to prickly pear, then it can cause asthma or nasal inflammation. Also when someone is eating broiled nopal stem, then it can has an extreme hypoglycemic effect. This is not seen when ripe fruit or raw stems are eaten.


Reduces hair loss: There are many hair care producers which add the pulp of prickly pear to their hair care products because it has anti – inflammatory and antioxidant compounds which can give a relief from many scalp conditions and in turn they can stimulate hair growth and reduce hair loss.

Osteoporosis protection: Prickly pear has antihistamine, antiviral and anti – inflammatory properties. Also it has flavonoids which can help to prevent the release of compounds that can help in the inflammation of the joints and muscles caused by allergies, fibromyalgia, exercise, arthritis and gout. The osteoporosis is an inflammatory disease which can be prevented and treated with the prickly pear supplementation.

Makes your hair shiny: Prickly pear oil can be used if you want to make your hair glossy. It can give you double the amount of protein and fatty acids than argan oil which is popular oil that is used for restoring the natural hair shine.

Nourishes hair: The oil from the seeds of prickly pear has a lot of vitamins, minerals and fatty acids which can be very beneficial for the skin. Also they can nourish the hair and scalp by providing the healthy oils which may be lacking. Prickly pear has Vitamin E which can deeply condition the hair.

Reduces dark circles: There are many causes which can lead to dark circles under eye eyes. The major factors which can cause your under eye area to become dull and get a bluish – purplish tinge are oxidative stress, dehydration and lack of sleep. The seeds of prickly pear have skin brightening properties and nourishing fatty acids. These properties can help to lighten the dark circles. Also these properties are making the prickly pear seed oil a very effective choice for damaged skin, aging and mature. 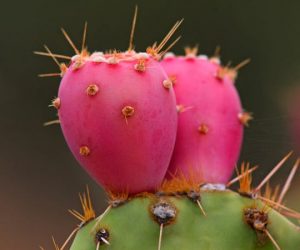 
Heals cuts, wounds and blemishes: Prickly pear oil has good concentrations of phenolic compounds which are possessing antioxidant effects on the skin and they can help to repair the damaged skin. When you use this oil, then it can help cut wounds, scars and other blemishes to heal and they will fade over time. You should apply this oil on regular basis to get its benefits.

Brightens the skin tone: Prickly pear oil is often used for the skin because it posses brightening properties. It has a linoleic acid which is a fatty acid. This component will nourish the skin and at the same time it will eliminate dullness. Also it can protect your skin from UV radiation.

Stroke prevention: It is known that when there is a decrease in the total body and elevated cholesterol, glucose and blood pressure levels, then they can all impact on the cardiovascular health in a positive way. When these leaves are decreased, then your body has less risk of getting stroke or heart attack.