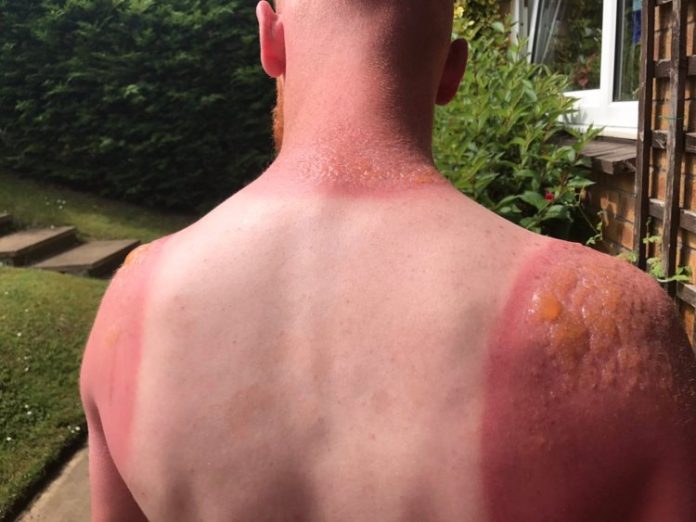 We all know what sunburn is. It is red and painful skin which feels too hot to the touch. Usually, sunburn appears within a few hours after too much exposure to UV (ultraviolet) light from the sunshine or from artificial sources such as sunlamps. Sunburns can take several days to fade or they can take it longer. The intense and repeated sun exposure which is resulting in sunburns can increase your risk of other skin damages and some diseases. They include rough spots, dark spots, dry or wrinkled skin and skin cancers such as melanoma. You should prevent sunburns and related conditions by protecting your skin. This is very important when you are going out and even on cool or cloudy days you can get sunburns because there is still sun so in these days also protect your skin. If you have sunburns, there are many home remedies and treatments which can soothe your skin as it heals.

Signs and symptoms of sunburns

Here are some signs and symptoms of sunburns:

You should know that any exposed part of your body, including your lips, scalp and earlobes, can burn. Also the covered areas of your body can burn too, if you are wearing clothes that has a loose weave which is allowing UV light through. Also your eyes which are extremely sensitive to the UV rays can burn. If your eyes are sunburned, then they can feel gritty or painful. In the most cases signs and symptoms of sunburn appear within a few hours after the sun exposure. But you should know that it can take one day or longer to know the full extent of your sunburn. In a period of few days, your body will start to heal itself by peeling the top layer of your damaged skin. After the peeling, your skin can have temporarily an irregular pattern and color. If you have bad sunburn, then it can take several days or longer to heal. 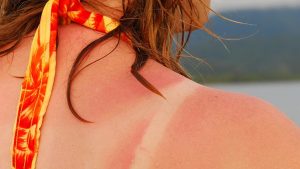 When you are exposed too much on UV light, then this is causing sunburns. We know that the UV radiation is the wavelength of the sunlight in a range which is too short for our eyes to see. UVA (Ultraviolet A) is a type of solar radiation which is mostly associated with the skin aging (also known as photoaging). UVB (Ultraviolet B) is associated with the sunburn. When you are exposed to the both types of radiation, then this is increasing your risk of developing skin cancer. Tanning beds and sunlamps are also producing UV light and they can cause sunburn. We know that the melanin is the dark pigment which is located in the outer layer of the skin – epidermis, and this pigment gives the skin its normal look. When someone is exposed to UV light, then the body protects itself by accelerating the production of the melanin. When someone has extra melanin, then it creates the darker color of a tan. The suntan is the way in which the body is blocking the UV rays to prevent sunburn and other skin damage. But this protection only goes so far. You should know that the amount of melanin which you produce is determined genetically. There are many people who do not produce enough melanin to protect their skin. Eventually, the UV light will cause the skin to burn which will bring swelling, redness and pain. Also you can get sunburns on cloudy, hazy or cool days. As much as 80% of the UV rays pass through clouds. Water, sand, snow and other surfaces can reflect UV rays and they can burn your skin as severely as the direct sunlight.

Risk factors: Here are some factors which can increase your risk of sunburns:

Angioedema is one type of swelling. It affects the deeper layers of our skins. In some cases, the swelling is accompanied by hives. They...
Read more

Natural treatments and home remedies to get rid of skin tags

Skin tags are medically known as acrochorda. They are small and soft skin outgrows which appear on many parts of the body. Most of...
Read more

The rapeseed oil has many health benefits, such as supports the respiratory system; support bone and joint health; supports cardiovascular health; strengthen the immune...
Read more

Polymyalgia rheumatica is a condition which causes a pain and stiffness in the shoulders, neck, lower back and hips. There are some cases when...
Read more

Choline is essential water – soluble nutrient which all people must consume. Most people get enough choline from dietary sources, but some populations have...
Read more