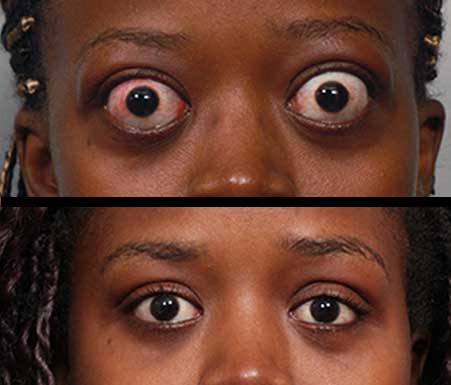 Graves’ Disease is an immune system disorder which is resulting in overproduction of thyroid hormones (a condition known as hyperthyroidism). There are many different diseases that can result in hyperthyroidism but it is one of the most common causes for it.

The thyroid hormones are affecting many different body systems so the signs and symptoms which are associated with the Graves’ disease can be wide-ranging and they can significantly influence your overall well being.

The Graves’ disease can affect any single person but it is more common in women and people who are before the age of 40. The primary treatment for it is to inhibit the overproduction of thyroid hormones and to lessen the severity of the symptoms. 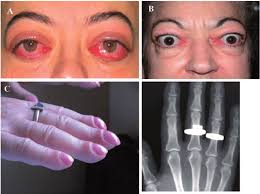 The most common signs and symptoms include:

It is known that Graves’ disease is caused by a malfunction in the body’s disease-fighting immune system but the exact reason why this is happening is not known. The immune system is producing antibodies that are designed to target a specific virus, bacterium, or other foreign substance. When someone has this, then the body is producing an antibody to one part of the cells in the thyroid gland which is a hormone-producing gland in the neck.

The thyroid function is regulated by a hormone released by a tiny gland at the base of the brain (known as the pituitary gland). The antibody which is associated with it (known as thyrotropin receptor antibody) acts as the regulatory pituitary hormone. This means that the TRAb overrides the normal regulation of the thyroid which is causing overproduction of thyroid hormones (called hyperthyroidism).

Every single person can develop Graves’ disease but there are many different factors that can increase the risk of this disease. Some of the most common factors for Graves’ disease are

Cigarette smoking can affect the immune system which is increasing the risk of Graves’ disease. Those people who have Graves’ disease are having an increased risk of developing Graves’ ophthalmopathy.

It is known that recent childbirth or pregnancy can increase the risk of this disorder, particularly among women who are genetically susceptible.

It is known that stressful life events or illness can act as a trigger for the onset of Graves’ disease among people who are genetically susceptible.

Graves’ disease usually is developing in people who are younger than age 40.

There are many studies in which are said that women are having increased chances of developing Graves’ disease compared to men.

It is known that family history is a risk factor for the Graves’ disease so it is likely a gene or genes to make a person more susceptible to the disorder.

Those people who have disorders of the immune system, such as rheumatoid arthritis or type 1 diabetes have an increased risk for Graves’ disease.

Here are some possible complications of Graves’ disease:

If you leave the hyperthyroidism untreated, then it can leave to brittle bones. When you have too much thyroid hormone, then it can interfere with your body’s ability to incorporate calcium into your bones.

If the Graves’ disease is untreated, then it can lead to changes in the structure and function of the heart muscles, heart rhythm disorders, and inability of the heart to pump enough blood all parts the body.