The glands in the ear canal are producing the earwax. We know that the earwax is a yellowish and waxy material. It is also known as cerumen. Doctors are not completely sure what is the reason to have earwax but they know that earwax trap the dust and other small particles and prevent them to reach and potentially infecting or damaging the eardrum. The earwax has some functions, like lubricating, cleaning and protecting the lining of the ear canal by repelling water, trapping dirt and making sure that bacteria, fungi and insects do not get through and cause harm in the eardrum. The earwax is slightly acidic and it has antibacterial properties. If we do not have earwax, then the ear canal would become extremely dry, waterlogged and infected. But if the earwax becomes hard or it accumulates, then it could lead to problems. In normal cases, the earwax dries up and falls out of the ear along with any trapped debris or dust. Every single person makes ear wax but the type and amount are genetically determined just like height or hair color. Those people who have smaller or oddly shaped ear canals can have problems with the naturally occurring wax to get out of the canal and this could lead to wax impactions. Mainly, the earwax consists of shed layers of the skin. You should know that the earwax consist of 60% keratin, between 12% and 20% saturated and unsaturated long – chain fatty acids, squalene and alcohols and between 6% and 9% cholesterol. 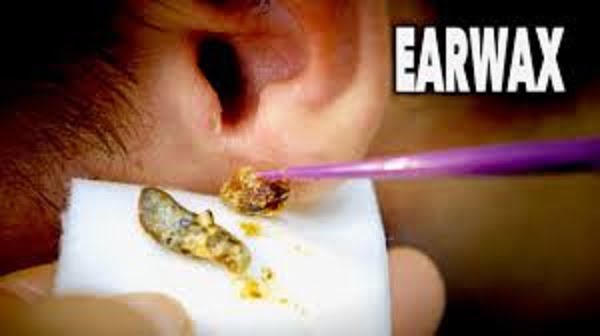 When there is excessive accumulation of earwax, especially when it is impacted, then it could lead to a blocked ear. The blocked ear can affect the hearing and it can be painful. When the earwax build-up hardens and it blocks the ear canal, then it can form a plug or blockage. Here are some symptoms of an earwax impaction:

It is believed that the most hearing – aid faults are caused by an excessive buildup of earwax. If you are using Q – tips or another object to remove the earwax blockage, then this can worsen the impaction. If you have severe spinning sensation, loss of balance or you are not able to work, then you should visit your doctor. Also if you have persistent vomiting or high fever, then talk with your doctor. If you experience sudden loss of hearing, then you should talk with your doctor.

It is known fact that the earwax blockage or impaction can happen more frequently in those people who produce a lot of earwax. This wax gets pushed deep inside the ear canal. If you are using napkin corners, keys, bobby pins or Q – tips to remove the earwax or relieve the itching in your ear, then it can worsen the buildup because these objects can push the wax deeper into the ear canal. Earplugs and hearing aids encourage the earwax to accumulate inside the ear and this is preventing it from falling out naturally. Also swimming can cause some people to produce additional earwax.

Here are some factors which are causing people to collect more earwax in their ears:

The ear infection can happen if the earwax is not treated. There are very rare cases when the ear infection can spread to the base of the skull which could lead to cranial paralysis or meningitis. If the earwax pushes the eardrum or the tympanic membrane, then vertigo can happen. This can lead to nausea and a sensation of moving when the affected person is not moving.